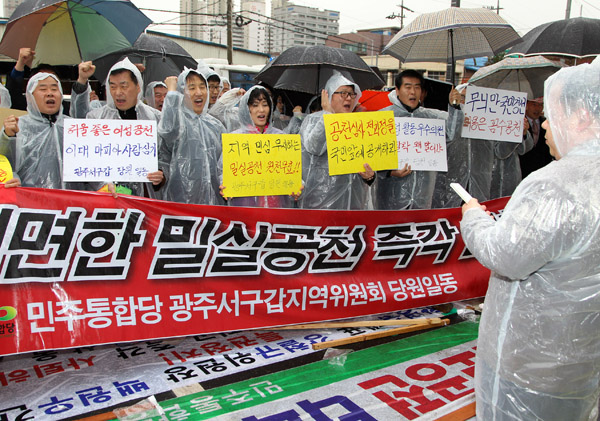 Supporters of incumbent lawmakers in Gwangju stage a rally in front of the Democratic United Party headquarters in Yeouido, western Seoul, yesterday as the main opposition party announced its decision to oust six incumbent lawmakers of the Jeolla region. [YONHAP]


The Democratic United Party, the country’s largest opposition, yesterday announced its decision to oust six lawmakers of the Jeolla region in the April 11 legislative election nomination process, signaling its anti-incumbency drive in the party’s traditional stronghold.

The DUP announced yesterday the final list of candidates to run in Gwangju and the Jeolla provinces in April’s elections. Of the 30 constituencies in the region, the DUP lawmakers are currently occupying 28 seats.

With this decision, the DUP has so far decided to introduce new candidates in 13 constituencies in the Jeolla provinces and Gwangju. 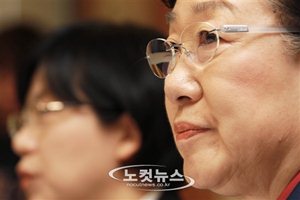 Two lawmakers representing the strongholds had earlier announced their intentions to not seek reelection, and four others including Chung Sye-kyun and Chong Dong-young have declared their bids to run in the capital region. The DUP decided not to field a candidate in the Dong District of Gwangju, where a campaigner committed suicide over alleged illegal campaign activities.

The DUP also said it will hold primary races in 23 out of the 30 constituencies in Jeolla and Gwangju, indicating that more incumbent lawmakers in the stronghold may not be able to seek reelection. Of the 23 primaries, 12 will take place in the constituencies where DUP lawmakers currently hold seats.

Four senior lawmakers, including Representative Park Jie-won of Mokpo, South Jeolla, still managed to survive the massive elimination process, as the party said yesterday they will give exclusive nominations to them.

The anti-incumbency drive in the stronghold quickly prompted fierce protests from the lawmakers who failed to win nominations. Some of the lawmakers said they will think about running as independent candidates, indicating that the DUP will likely encounter difficult races in its traditional stronghold due to split votes from supporters.

Four of the six representatives, including Kang and Choi, were technocrats-turned-lawmakers, and it was widely expected that the DUP would drop them. Earlier in the nomination review process, the party said “liberal identity” was one of the key factors in the screening, indicating a likely purge of the moderates.

“The leadership has decided to slaughter the Jeolla politicians based on the scenario of the Roh Moo-hyun loyalists,” said a statement, issued by four former technocrats. “Flawless candidates were eliminated as the nomination review committee used unfair standards. We want to know what exactly the identity is the nomination review committee is talking about.” Choi said the former technocrats have never hesitated to give constructive criticism based on expertise and logic. He said the pro-Roh faction has decided to eliminate them because they were hard to control.

Representative Park, a member of the Supreme Council who successfully won the nomination in his constituency in Mokpo, also demanded the party leadership and review committee explain why those from the Jeolla regions are elimination targets.

“We can only understand the outcome when the party makes similar changes in other regions,” Park said.

The fierce resistance of the Jeolla-based politicians, including the party’s old guards who were Kim Dae-jung loyalists, is expected to widen the fissure inside the DUP over the nomination process.

As of yesterday, the DUP has completed the nomination process of 147 constituencies. In the April legislative elections, voters will elect 300 lawmakers, including 246 elected members.

Meanwhile, DUP Chairwoman Han Myeong-sook will meet with her Unified Progressive Party counterpart Lee Jung-hee today to resume negotiations on forming a liberal alliance. The talks were deadlocked since Feb. 24. It remains to be seen whether a breakthrough will result from today’s meeting.