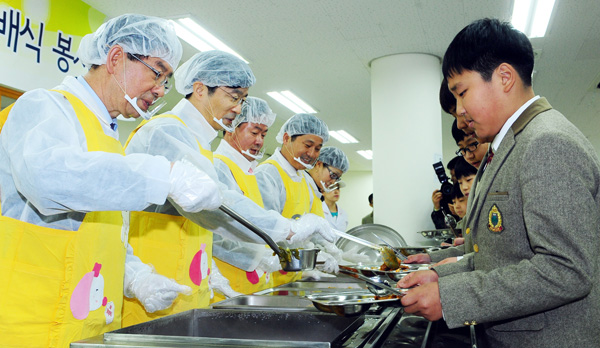 Seoul Mayor Park Won-soon, left, and Kwak No-hyun, second from left, liberal superintendent of the Seoul Office of Education, volunteer together to distribute free lunches to students yesterday at Sunggok Middle School in northern Seoul. Park is said to support Kwak who is under fire for appointing allegedly unqualified teachers. [NEWSIS]


A conservative teachers’ group has accused Seoul’s education chief again, insisting that he has appointed unqualified teachers as officials in the city’s education office.

The Korean Federation of Teachers’ Associations, a conservative group, yesterday accused Kwak No-Hyun, liberal superintendent of the Seoul Metropolitan Office of Education, of appointing a group of unqualified teachers as officials at the education office as a way of thanking them for their support while he was detained for four months.

The association said that six of the 15 newly appointed officials at the education office are people who campaigned for Kwak’s release while he was detained on charges of bribing a former campaign rival to drop out of the race for education chief in 2010.

Kwak was convicted of the charge, fined and released from custody in January. 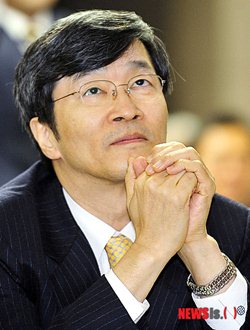 It added that these officials are taking important roles in departments that will handle the city’s core education policies such as the free school lunch program and students rights ordinance.

“The six participated in the campaign for Kwak and 13 of the 15 officials are members of the Korean Teachers and Education Workers Union,” Ahn Yang-ok, the chairman of the Korean Federation of Teachers’ Associations said during a press conference. “The city’s education policy will depend on a handful of Kwak’s unqualified aides. He is attempting to make his office a reclusive place guarded by his close aides.”

The association said that two of the officials spearheaded petitions signed by 195 teachers and submitted to a court to release Kwak in November, which said “[Kwak] is God’s gift to parents, teachers and students who are suffering from expensive education costs,” and “Kwak is the only person who can solve the city’s terrible education system and arresting him is such a huge mistake.”

It added that one of the appointed officials had worked as a task force member of the city’s education policy development team and even visited Kwak when he was detained.

“He is expressing his gratitude to those people who supported him when he was having a hard time,” Ahn said.

He added that it will request the Board of Audit and Inspection to inspect the appointments Kwak has made in order to establish the fairness in the personnel management and they will bring him to court if any irregularities regarding the appointments are found.

However, the education office said that the appointments do not have any problems because any capable teachers can be dispatched to the office when a request is made properly.