At concert, a plea for the defectors

At concert, a plea for the defectors

A group of South Korean celebrities and teenage defectors from North Korea sing together at the “Cry with Us” concert, which was organized to urge China not to repatriate North Korean defectors to their communist homeland at Yonsei University on Sunday at 7 p.m. [YONHAP]


In a desperate move to raise global awareness of China’s forceful repatriation of North Korean defectors, South Korean celebrities came together to stage a concert for the escapees.

The concert, “Cry with Us,” was organized by popular celebrity couple Cha In-pyo, a movie star, and Shin Ae-ra, an actress, on Sunday at Yonsei University in western Seoul, where roughly 900 people gathered. 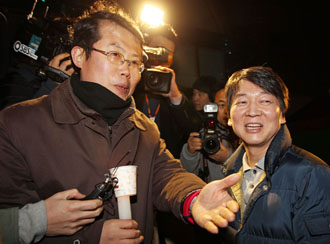 Ahn Cheol-soo, dean of the Graduate School of Convergence Science and Technology at Seoul National University, right, visits a candlelight vigil held to protest China’s repatriation of North Korean defectors on Sunday night in front of the Chinese Embassy in downtown Seoul. [YONHAP]

The event was named after the theme song of the movie “Crossing,” which depicted the journey of a North Korean man who defects from the communist country. Cha played the main character in the film.

The 47 celebrities who participated in the event signed a statement that was read during the event, saying they would “cry with the defectors.”

“Chinese nationals, and all the people of the world, whoever you are, wherever you are now, please stop what you’re doing and listen to our appeal, we are celebrities from South Korea,” the statement said.

“We don’t represent or symbolize any political or diplomatic organizations. We have just come here out of brotherhood and sisterhood, out of concern for the North Korean defectors who were arrested in China and are now at risk of being repatriated to the North.

“If these people are sent back to the country, they and their families will likely be executed on charges of treason for escaping the regime during the mourning period for late leader Kim Jong-il,” the statement said.

“Is it right for someone to be executed because they are trying to escape their nation out of hunger? Is a person’s life worth so little? As precious as our lives are, so too are theirs.

“To our dear Chinese nationals, please spread our desperate appeals so as to keep the Chinese government from repatriating North Korean defectors.”

The concert was attended by about 100 defectors living in the South, who hid their faces with white masks out of fear that their families in the North would be executed.

Also participating in the event were around 60 students from Yeomyung School, an alternative school for young North Korean defectors. The students joined the celebrities in singing the theme song “Cry with Us.”

Comedian Park Mi-seon, 45, was one of the participating celebrities.

“If the defectors are sent back, they and their offspring will be dragged to prison camps,” Park said. “But if we work together, we can rescue them.”

Lee Gyeong-hwa, 22, a defector attending Yonsei University, also read out a letter she wrote. When she was 17, Lee was arrested by Chinese authorities while trying to defect and was repatriated, but she later succeeded in escaping the country.

“We defectors know that those repatriated to the country are highly likely to face execution,” Lee said. “But please wait a little longer and don’t lose hope.” Cha, 45, said he began to be interested in North Korean defectors while making the film.

At Sunday’s concert, he said he would hold a series of shows worldwide to raise awareness to the issue.

“This concert marks the beginning of events around the world to save the defectors,” Cha said. “I’ve already asked for the cooperation of U2, the popular Irish rock band.” He has not yet had a response from the band.

Several celebrities told the JoongAng Ilbo that their agencies had discouraged them from participating in such a diplomatically sensitive event, which could have an effect on their popularity in China, where the entertainers are popular as part of the so-called Korean Wave.

After the concert, software mogul and potential presidential hopeful Ahn Cheol-soo made a rare appearance at a hunger protest being held by a group of defectors and their supporters in front of the Chinese Embassy, central Seoul.

It was the first appearance Ahn has made since Feb. 6, when he held a press conference to provide details about his new charity.

Ahn told the reporters who surrounded him at the rally on Sunday that he decided to support the protesters after receiving an e-mail from defector Lee Ae-ran, a professor at Kyungin Women’s University.

“I thought [my visit] could console [the protesters],” Ahn said. “I think the matter of protecting minorities and their human rights is a value that can’t be exchanged with anything, beyond any ideology or political system.

“I previously had a lot of interest in the issue, and after I got the e-mail, I felt my heart ache.”

As usual, Ahn did not respond to questions about whether he will run in the December presidential election.

But speculation has arisen over whether his presence at the demonstration was motivated by political aims, as many left-wing politicians in Seoul have been relatively passive in fighting for North Korean defectors compared to conservative, anticommunist lawmakers and party members.