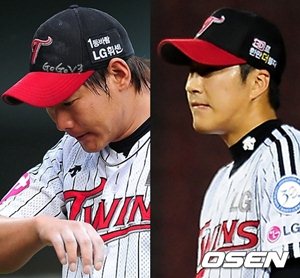 Later that day, the KBO issued an apology to baseball fans for failing to prevent match-fixing schemes.

“We deeply apologize to baseball fans for this huge disappointment,” said the KBO via a press release.

“We will give our full cooperation to prosecutors in order to stamp out this terrible scheme.”

The KBO said it has punished Park and Kim based on Article 144, Clause No. 3 of a baseball regulation that allows it to suspend players who have disgraced baseball from participating in the league.

With the punishment, Park and Kim will be prohibited from participating in every amateur and professional sports league game including baseball in 2012.

The KBO said that this is a temporary decision, and it will make its final judgment as soon as the Daegu Court rules on the case.

Park is under suspicion of accepting bribes in return for trying to fix baseball games at least twice last year.

His teammate Kim was arrested on Thursday after admitting to prosecutors that he was involved in a match-fixing scheme twice during the 2011 regular season when he played for the Seoul Heroes.

The KBO said that officials are discussing the final punishment for Park and Kim, but predicted that the possibility of giving them the heaviest punishment, kicking them out every sports league in the country permanently, is very high.

“We will try to provide a specific system that will prevent potential match-fixing schemes,” the KBO said.

As the allegations have turned out to be true, rumors of expanding the investigation into all teams spread during the weekend.

But Daegu Prosecution, which is in charge of baseball match-fixing, denied the rumors, declaring that it will focus on investigating Park and Kim for now.