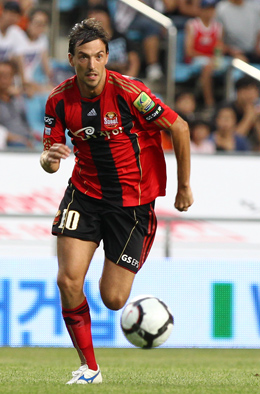 Choi wasn’t mad because the team drew a tie against weak side Daegu on his official coaching debut (Choi was interim coach last season), but because of the “slowdown performance” of his player Dejan Damjanovic.

Choi insisted Damjanovic didn’t give his best on the pitch. In fact, on Sunday, the 31-year-old striker came off the pitch just 22 minutes after the kickoff, replaced by Kim Hyun-sung.

“Dejan always finds spaces and motivates teammates. In fact, his passion for goals is the best in the K-League,” Choi said on Sunday. “But today, he didn’t show one single percent of what he’s good at.”

Damjanovic played against Daegu after playing a friendly for his Montenegro national football team on Thursday. He played 64 minutes in the match against Iceland and returned to Korea on Friday, just two days before the Seoul’s season opener.

The Montenegrin may not have been in top shape with the tight schedule, but according to Choi, who was one of Korea’s top strikers in the late 1990s, Damjanovic just wasn’t mentally ready to perform his best.

“Dejan’s fitness was all right,” Choi said. “He just showed a different performance, forgetting his promise between teammates and coaches. I can’t forgive that.”

Sunday’s incident may root back to events earlier this year. Damjanovic, who was last season’s K-League top scorer with 24 goals in 30 matches, received an offer in January from Chinese Super League club Guangzhou R&F FC who reportedly proposed a $2 million salary - expected to be double Damjanovic’s current salary - and $4.4 million to Seoul in transfer fees. However, Seoul rejected the offer and Damjanovic was disappointed with the club’s decision.

It was reported that the former Incheon United player refused to participate in team training, so Seoul tried to appease him by giving him a special vacation. It all seemed to work out well when Damjanovic, who is contracted with Seoul until the end of 2013, returned to training camp in Japan.

However, after the incident, Damjanovic said through his agent on Monday that it is a “misunderstanding” that he deliberately held back at the match, and he wasn’t really feeling well after playing in the international friendly.

But questions still remain because in the past, Damjanovic has performed well after coming back from his international duties. This is not the first time he has traveled between Montenegro and Korea, so by now I think he should have known how to quickly gear himself up for the K-League match after traveling.

The current situation, in fact, isn't set up well for Damjanovic. The winter transfer season window is closed and it is no secret that the player can’t win over the coach when it comes to playing matches. Whether or not he deliberately underperformed, Damjanovic should apologize to his teammates and perform his best in the future, which is also what coach Choi is looking for at this moment.

It’s rare for a coach to publicly denounce his own players, but if this happens then there must be something that the coach really wants fixed.

Some speculate that Choi used this incident as a strategic movement to gain control over not only Damjanovic, but also over other players so that they can keep their intensity up and concentrate more on the league campaign.

Regardless, what I can read from this incident is that Choi really wants Damjanovic to stay with his squad and help lift Seoul to a championship. I believe the 41-year-old coach will support Damjanovic in future matches.

Before the situation gets worse, both parties should leave their personal problems behind and think about what is really right for the team. We don’t want to see the Korean version of a Carlos Tevez-Roberto Mancini feud here.