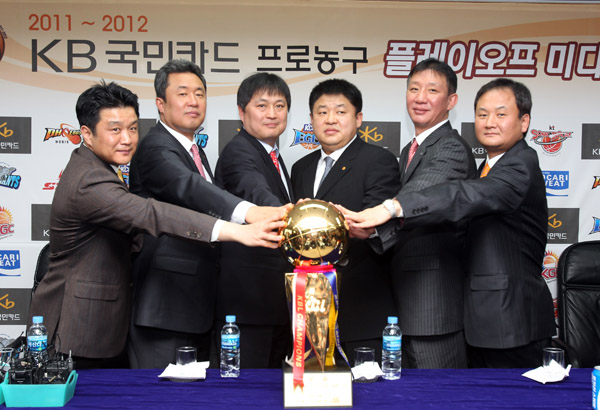 Coaches from the participating playoff teams pose in front of the KBL trophy during the Media Day event at the KBL headquarters in Seoul on Monday. From left to right are: the Elephants’ Yoo Do-hoon, the Sonicboom’s Jeon Chang-jin, the KGC’s Lee Sang-beom, the Promy’s Kang Dong-hee, the Egis’ Hur Jae, and Mobis Phoebus’ Yoo Jae-hak. Photo by Kim Jin-kyung


With the regular season title in the hands of the Wonju Dongbu Promy, the Korean Basketball League is now moving into the post season as six teams fight for the championship trophy.

The first round playoff, a best-of-five series, begins with No. 4 seed and defending champion Jeonju KCC Egis hosting the No. 5 seed and 2010 champion Ulsan Mobis Phoebus tonight at 7 p.m. The third-place Busan KT Sonicboom and sixth-place Incheon ET Land Elephants square off tomorrow.

The winner of the Egis-Phoebus game will meet with second-place Anyang Korea Ginseng Corporation for a slot in the best-of-seven championship series, while the winner of the Sonicboom-Elephants series will go against the top-seeded Promy in the second round of playoffs to reach the final.

Local basketball pundits say that the Promy and the KGC have the advantage, but after last season when the third-place Egis and fourth-place Promy met in the finals, every game will be tough for these six teams.

The two teams that jumped ahead at the last minute in the regular season will face each other. This series is also reminiscent of the 2009-10 championship series, with Phoebus winning the title with four wins and two losses.

Reigning champion Egis was on a five-game winning streak through the final regular season game on Sunday. The team has had seven wins and three losses in the last 10 games.

In fact, the Egis, led by coach Hur Jae, hasn’t missed the final series for the last three seasons. Although it has finished in third place in the regular season for last three seasons, the team won the trophy in 2009, was the runner-up last season and won yet another championship title last year.

“For this series, we’ll need a lot of preparation to get good results,” Hur said during the KBL Playoff Media Day event at the KBL headquarters in Seoul on Monday. “Coach Yoo Jae-hak has plenty of experience and I’m a little nervous about that.”

The Egis, the best offensive team in the regular season with 81 points per game, is considered to have the advantage in the low post, thanks to center Ha Seung-jin, the KBL’s tallest player at 221 centimeters (7 feet, 3 inches), and the 204-centimeter-tall foreign player Jameel Watkins, who replaced DeShawn Sims last month.

But Hur may be worrying about point guard Jeon Tae-poong, who is recovering from a hamstring injury.

If Jeon doesn’t recover in time, Phoebus point guard Yang Dong-geun, the runner-up in assists (six per game), will be able to move freely. Others who would benefit from Yang’s presence are Terrence Leather, who finished second in rebounds (13.41 per game), and the 198-centimeter-tall forward Ham Ji-hoon, who joined the team last month after finishing his military duty.

But Phoebus, which has lost just once in its last 12 games, has only won once against the Egis in the regular season, and has lost five times.

“We’re behind in almost everything against the Egis, including height, technique and experience, so we’ll just keep attacking its weaknesses,” Phoebus coach Yoo Jae-hak said.

There will be plenty of good match ups; both teams have national team shooting guards in their roster. The Sonicboom has Cho Sung-min, while the Elephants have naturalized Korean Moon Tae-jong. It will also be interesting to see how the Elephants’ veteran point guard Shin Ki-sung plays against his former team.

But the definitive factor will be the condition of the foreign players, both of whom are coming off of injuries.

The Sonicboom’s Charles Rhodes and the Elephants’ Herbert Hill have put up similar numbers all season.

Sonicboom coach Jeon Chang-jin, a five-time KBL Coach of the Year recipient, said the team is still struggling with an injury-plagued squad, but will put forward its best effort.

“The Elephants are tall and play tough, so we need to play a faster and more elaborate game,” Jeon said. “We will also change our defense compared to the regular season.”

The Elephants coach Yoo Do-hoon said will urge his team to play with the mindset that they can learn from top teams.

“It’s important to analyze your opponent, but I think it is also critical to increase our team’s concentration and level of play to clearly map out our goals,” Yoo said.

Teams in the second round

The Wonju Dongbu Promy made history this season and could win the playoff as well. The team has the longest winning streak (16), the most single season wins (42) and the highest winning percentage (0.815) in the league. They also have the best defense in KBL history, allowing only 67.9 points per game.

Coach Kang Dong-hee said the championship trophy will be the cap on its historical season.

Since the team will not play until next Saturday, Kang said they will have training games and practice matches with college teams.

“We were solid throughout the regular season, but we will also work hard to maintain our rhythm in the playoffs,” Kang said.

The Promy has a better head-to-head record against any team in the playoff round, but Kang said that if he had to pick one team to worry about, it would be the Egis, which beat them in last season’s final.

“All five teams are contenders for the title, but the Egis is the team that worries us since it has lots of experience winning the title,” Kang said.

Meanwhile, the Anyang KGC, which clinched second place, is hoping to claim the title with a young squad led by “super rookie” forward Oh Se-keun.

Yet some experts worry about the KGC’s lack of experience, while foreign player Chris Daniels’ slow feet may slow down their attack.

KGC coach Lee Sang-beom said, however, that the team will be more ambitious in the playoffs.

“Speed is our strength and we just need to show this team’s color in the playoffs,” Lee said. “Although the Promy is the top contender to win the title, we will be able to play well against the other teams if we focus on our forte.”