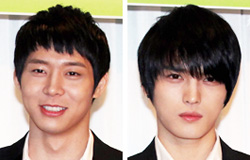 JYJ member Kim Jae-joong verbally and physically attacked his fans while part of the group TVXQ, according to a sound recording posted online by entertainment news Web site Dispatch yesterday.

In the 10-minute clip from about two years ago, Kim can be heard hurling profanities at a group of female fans. He can then be heard slapping the fans, who react only with surprised gasps.

“You guys must have so much fun just following us around all day. Why do I have to live my life in hiding because of bitches like you?” Kim said in between the slapping noises.

In another recording, apparently also taken during the incident, fellow band member Kim Junsu tells off fans making recordings but does not slap them or use obscenities.

A phone recording featuring third JYJ member Park Yu-chun was also released by the entertainment Web site. In a 10-second call, Park yells obscenities at a fan who reached him on his personal cell phone.