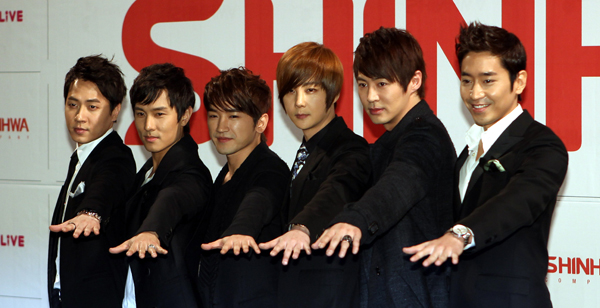 Shinhwa, the 1990s music sensation, has staged a comeback after a four-year hiatus, and fans have already snapped up tickets for upcoming events, boding well for the performers.

The group discussed the comeback at a press conference on Monday, which also marked the band’s 14th anniversary.

At the event, which was streamed online for fans worldwide, the band announced that following its Korean concerts on March 24 to 25, it will tour China, Taiwan, Singapore and Thailand beginning on April 30.

The group will also perform for two days at Yokohama Arena in Japan from May 29 to 30 and then make its way to Kobe to perform at Kobe World Memorial Hall on June 5.

The tickets for the band’s Korean comeback were sold out way ahead of the concert dates. In just 40 minutes of going on sale on Feb. 13, a total of 20,000 tickets were sold, setting a new record for the Interpark ticket Web site.