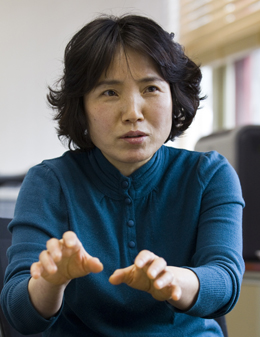 Only weeks after his release from custody after being convicted on bribery charges, Kwak No-hyun, liberal superintendant of the Seoul Office of Education, is once again embroiled in controversy. He faces allegations that he gave promotions as favors to his secretaries and requested that fired teachers be rehired.

The Ministry of Education, Science and Technology last week turned down Kwak’s request to rehire three liberal teachers who had previously been fired from private schools and two of whom actually worked for his election campaign. While Kwak failed to rehire them as public high school teachers, he did manage to recruit his two confidants as fifth-level civil servants.

The superintendent’s decision raised the ire of the labor union under the Seoul Education Office, an organization with a markedly different philosophy from the liberal Korean Teachers and Education Workers’ Union.

Lee Jeom-hui, head of the labor union, last Friday began a one-person relay protest in front of the Seoul Metropolitan Office of Education. Each union member is taking a turn. Established in November last year, the union has over 1,000 members who are administrative employees at the Seoul Metropolitan Office of Education and public elementary, middle and high schools in Seoul.

“Superintendent Kwak is trying to make the public organization his own private office,” Lee Jeom hee said in an interview with the JoongAng Sunday at her workplace, Shinam Elementary School, on March 2. “If he doesn’t correct his inappropriate hirings and promotions, we’ll stage a strike and a campaign to oust him.”

After media reports broke on Feb. 29 that Kwak even blocked Lee’s e-mail from sending a messages to officials at the Seoul Metropolitan Office of Education, the education office restored Lee’s e-mail service on March 2.

“I tried to send an e-mail to 3,000 Seoul education officials asking their active participation in signing a petition protesting Kwak’s decision on personnel affairs,” Lee said.

Lee has worked as an administrative worker at Seoul schools for 31 years and she also leads a consultative group for chief administrative officers at Seoul elementary, middle and high schools.

Q. Why do you protest Kwak’s promotions?

A. He ignored principles. One clear example was that he hired his two close aides as fifth-level secretaries for the education office. The secretary position is regarded as the pinnacle for public service workers. To become a fifth-level civil servant from the lowest ninth-level, it takes 15 to 20 years. Sometimes people even give up getting there. He also increased the number of secretaries to three from one and he put all of his confidants in the seats. Imagine how other public servants felt about that. Although Kwak eventually withdrew his decision, he even tried to promote five of his secretaries from seventh-level civil servants to the sixth-level. After I initiated a single-person relay protest, I received lots of e-mails from school administrators sympathizing with me.

Kwak argued in a press conference that his seventh-level secretaries deserve even higher positions than sixth-level and promoting them to the fifth level isn’t enough.

He said that because he doesn’t have the slightest idea of how schools actually work. Administrators like us suffer a murderous workload. We work on weekends rather than resting at home. I’ve been in this field for 31 years and the number of administrators at public schools is the same as it was 30 years ago. I met a female administrator working at a kindergarten. She was chosen after withstanding a competition ratio of 200-to-1, but she leaves work after midnight every day because she’s swamped with work. She doesn’t have time to date. Even married workers find it difficult to have dinner together on weekdays. Who would sympathize with a superintendent who’s preoccupied with promoting his confidants? Kwak failed to read the hearts of workers in the field.

You lambasted Kwak’s expansion of his secretary’s office as “secretary office politics.”

There’s no office in the 16 city and provincial education offices that has over 10 secretaries. The real problem is communication. Senior-ranking public service workers at the Seoul education office said the secretary office entirely blocks opinions they raise. Do you know what most school administrators are saying these days? “The superintendent only communicates with members of the Korean Teachers and Education Workers’ Union.” This means he doesn’t talk to teachers and administrators with differing ideologies.

But isn’t it natural that when a person becomes commander in chief, he wants to work with people who mesh with him?

Sure. But there’s a problem because he doesn’t trust existing public service workers and ignores them. If he really wanted to carry out reform, he should’ve tried to listen to the people who have experienced many trials and errors in the field. And he should’ve tried to find talented staff there, too. After he was sworn into office he rarely listened to us. A superintendent isn’t just chief of teachers, he’s also chief of administrators. But he avoids us and he discusses critical matters with his secretaries and auditors.

As a school administrator, what do you want to propose to the superintendent?

Many are calling on the need to [reduce spending on private education] and normalize public education. I really want to say that we can do that after we improve the working conditions of administrative offices in elementary, middle and high schools.

Is there anything that Kwak did right?

He deserves credit for improving integrity in schools. His emphasis on literature, arts and physical education was also positive.