Congress in U.S. takes up cause of trapped defectors

Congress in U.S. takes up cause of trapped defectors 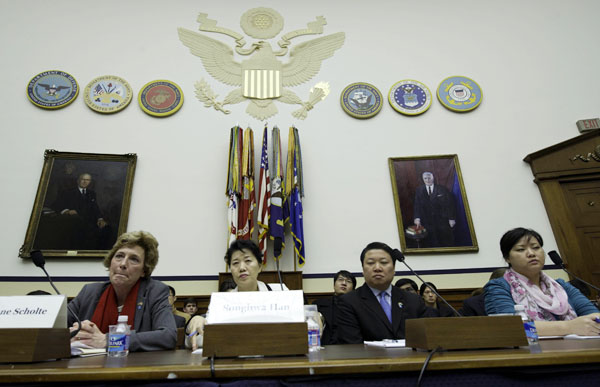 Han Song-hwa, second from left, and Jo Jin-hye, far right, testify about what it’s like to be repatriated to North Korea from China after trying to defect. Looking on are: Suzanne Scholte, chairman and founding member of the North Korea Freedom Coalition, far left, and an unidentified interpreter. [AFP/YONHAP]


WASHINGTON - A Congressional commission in the U.S. is accusing China of abusing human rights by repatriating North Koreans trying to defect to third countries through China.

Christopher Smith, chairman of the Congressional-Executive Commission on China, said Monday that the commission will seek concerted action with the U.S. government and the United Nations to pressure China to change its policy of repatriating defectors.

“It should have been at the center stage,” Smith told the JoongAng Ilbo. “You can’t compartmentalize things like this. These people will die, and we know it, shame on us we don’t act.”

China is known to have kept dozens of North Koreans in custody in several places since early February, according to human rights activists. The exact number is not known, but it’s at least 24. If sent home, they could be executed or sent to political prisons.

Smith spoke to a group of reporters after his commission held a hearing in which two North Korean defectors described the plight facing the trapped people if they are sent home.

It was the first time a hearing was held at the U.S. Congress on the issue.

Smith said the commission will urge the Obama administration to take action on the issue regardless of recent progress made in Washington-Pyongyang relations.

On Feb. 29, the U.S. agreed to give North Korea 240,000 metric tons of food aid in return for a suspension of the uranium enrichment program at the Yongbyon nuclear site.

Smith suggested the U.S. link the food aid to the fate of the defectors.

“When 240,000 metric tons of food is about to be given to North Koreans,” he said, “it is conceivable that we are not pushing strongly to protect these refuges from a cruel fate.”

He said the commission will also appeal to UN Secretary General Ban Ki-moon and the UN Human Rights Council to do something.

“We should at least make sure China knows without any doubt how serious this really is,” he said. “They want to be a world player all over Africa, all over Latin America. Well, stop sending refugees back to the execution chamber.”

Han Song-hwa, a North Korean defector who settled in the U.S. in 2008, attended the hearing with her daughter and gave a detailed account of what happens to people repatriated to the North. Since she first tried to defect from the North in 1998, China sent Han back four times. She said repatriated people were called “dogs” by the North Korean security officials and were forced to work in harrowing conditions.