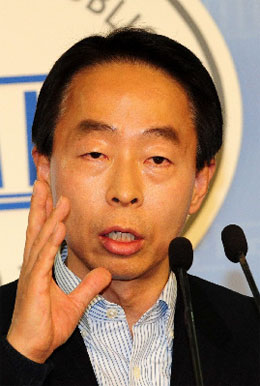 The schism inside the Saenuri Party grew wider yesterday as candidates who failed to win nominations from the conservative ruling party openly disavowed the nomination review outcomes and condemned the Park Geun-hye leadership, calling the results “political terrorism.”

Kim Hyun-chul, the second son of former President Kim Young-sam and the deputy head of Saenuri Party think tank Yeouido Institute, yesterday said he will leave the party in protest of the party’s decision not to give him the nomination for Geoje, South Gyeongsang.

“I was completely fooled by Park,” Kim said. “This is a political fraud. It is ruthless political retaliation and an act of political terrorism that has been handed down from the earlier generation.”

He also said his father was furious about the elimination, vowing political retaliation against Park. “My father won’t just sit with folded arms,” Kim said, reminding Park that the presidential election is also taking place this year. 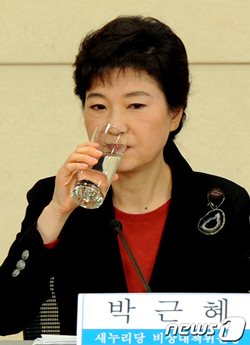 “I will lead efforts to end Park’s ugly political terrorism,” Kim said, adding, “I will keep all possibilities, including running independently, open.”

Kim was not the only one disgruntled about the outcome of the nomination reviews. On Monday, the party revealed its 81 candidates for the April 11 legislative elections, ousting 16 incumbent lawmakers who are mostly Lee Myung-bak loyalists.

Representative Lee Jae-oh, a key member of the pro-Lee faction, argued yesterday that the party must show the cutoff data to the failed contestants. “The data cannot be used as a political murder weapon,” he posted on Twitter. “If the review was fair, only the contestants need to see it with the explanations. That’s fairness and trust.”

After a struggle, Lee won the nomination to seek re-election in his Eunpyeong B District of western Seoul last month. But the party’s nomination review committee decided to drop other Lee loyalists when it announced the nominations en masse on Monday. Of the 16 incumbent lawmakers who were dropped Monday, 13 were known Lee loyalists.

Some of them also threatened to pursue legal action against the committee or run independently.

Of the districts designated as strategic areas, 11 are currently held by Saenuri lawmakers, and five of them were constituencies of pro-Lee lawmakers.

Representative Chin Soo-hee, a key member of the pro-Lee faction, also held a press conference yesterday and demanded that the party explain why it decided to name her Seongdong A District in eastern Seoul a strategic constituency. “I had confirmed that I was about 20 percentage points ahead of my rivals,” she said, demanding to know why she did not win an outright nomination.

Representative Shin Ji-ho, another Lee loyalist, also challenged the party’s decision to field a strategic nominee in his district of Dobong B in northern Seoul. “If they want to make me a scapegoat, I won’t die quietly,” he said.

Hwang Young-cheul, spokesman of Saenuri Party, yesterday tried to encourage calm but still warned that more incumbent lawmakers in the conservative stronghold of Gyeongsang will be further eliminated.

In his interview with the Buddhist Broadcasting System yesterday, Hwang said the party has more freedom to make reformative choices in Daegu and North Gyeongsang because it expects more support there.

“When the liberals unite and the conservatives split, the outcome will be bad,” he said. “We are very worried. The conservatives must do their best to field unified candidates.”