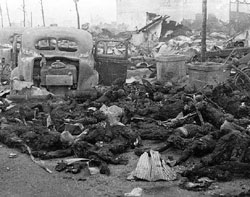 A commission affiliated with the Prime Minister’s Office confirmed yesterday that nearly 100 Koreans mobilized for forced labor in Japan were killed during the massive U.S. bombing of Tokyo in March 1945.

It is the first time the Korean government has confirmed the death of Koreans during the deadly bombing that is estimated to have killed around 100,000 people in the Japanese capital.

It is known that approximately 10,000 total Koreans were killed during the bombing, but the Japanese government has never acknowledged their deaths.

“The Japanese government is actively promoting this Tokyo bombing as a leading example of its wartime damage along with the atomic bombings, but it is only to shed light on Japan’s role as a victim, and has overlooked the death of Koreans,” said Jeong Hye-kyung, a director of the commission who led the finding. “The Korean government has also lacked interest. It has not conducted research on the Korean bombing victims so far.”

Confirmation by the Commission on Verification and Support for the Victims of Forced Mobilization under Japanese Colonialism in Korea came during its investigation into around 220,000 Korean victims of forced labor by Japan during World War II.

According to the commission, most of those 95 people were forced to work in military armament factories in Tokyo at the time of the bombing. Of them, 90 were killed instantly because they were locked inside the facilities, the commission said.

The U.S. air raid of March 1945 has been estimated to be the single most destructive bombing raid in history.

Jeong said the committee will request the Japanese government to share information on the remains of the bodies of the 95 people and work to get them back to their families.

The committee also plans to find more Korean victims of the raid.

Between February 2005 and July 2008, around 200,000 were registered by their families as victims of forced labor during Japanese colonial rule. About 8 million Koreans are estimated to have been mobilized into forced labor by Japan.