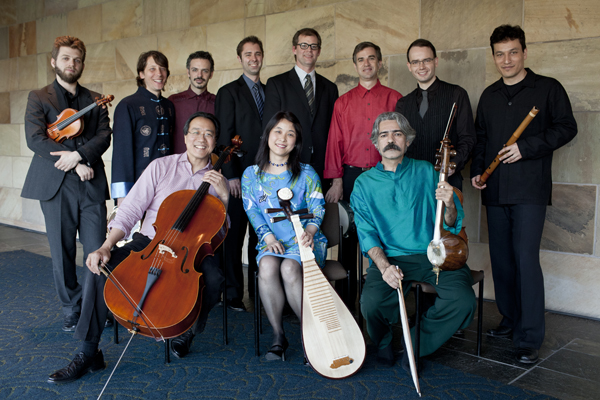 Cellist Yo-Yo Ma, far left in the front row, and his Silk Road Ensemble perform on Monday at Seoul Arts Center in southern Seoul. The concert is part of the Silk Road Project, which promotes the cultural traditions along the historic Asian trading route. See MUSIC, left. Provided by CREDIA

Today: Organized to increase access to contemporary art, the event was created by a group of artists who invite audiences to dance and take in a variety of visual and performance art. The group plans to continue their efforts with other performance events that blend fashion, video and photography.

Friday: Scottish soprano Lisa Milne will perform for the second time in Korea under the baton of Sung Shi-Yeon.

Milne has performed with some of the world’s leading ensembles, including the Metropolitan Opera, the English National Opera and the Berlin Philharmonic. The program features Mussorgsky’s “Introduction to Khovanshchina,” Strauss’ “Vier letzte Lieder” and Brahms’ Symphony No. 1.

Friday and Saturday: Pop-jazz group Pudditorium, led by Kim Jung-bum, will be performing at Evans Lounge.

Kim started in 2003 with the band Pudding, but felt the need to pursue his studies further and subsequently attended the Berklee College of Music in the United States and New York University for a master’s degree. He later worked on his solo project, Pudditorium, and traveled across the U.S. in order to find adequate sound engineers.

Monday: Cellist Yo-Yo Ma has been gathering artists from Korea, China, Mongolia, Iran, India, Turkey and other countries for a revival of his Silk Road Project, which he launched in 1998. As its name suggests, the project promotes the study and preservation of the cultural and intellectual traditions along the historic Asian trading route. Since the project’s inception, more than 60 works have been commissioned for the Silk Road Ensemble, which tours annually.

Despite the occasional breakups and regroupings in the 1990s, the band has sold over 80 million records worldwide, produced 18 hit singles in the United States and had 30 songs reach the top-30 charts in the United Kingdom.

Formed in Birmingham, England, in 1978 by keyboardist Nick Rhodes and bassist John Taylor, Duran Duran has been continuously writing rock songs that have been well received across the world.

March 29: Pianist Kim Sun-wook gives the first in a series of solo concerts. The 2006 Unesco Person of the Year held a solo concert at the Seoul Arts Center in 2010 and returns to the venue to perform Beethoven’s piano sonatas.

To June 27: “Jami” means “good food with a lot of nutrition” as well as “fun” in Jeju dialect. Admission to the show also includes a menu of Korean dishes and traditional tea.