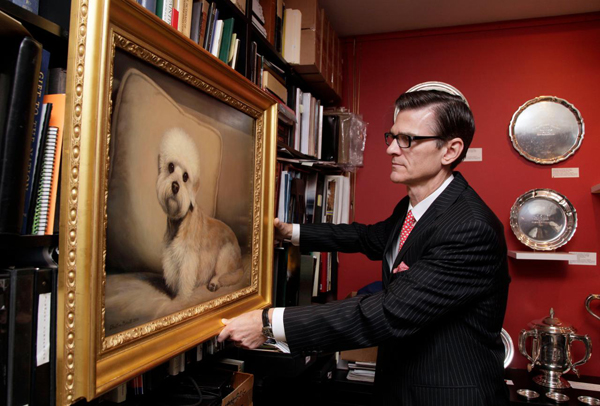 
LOS ANGELES - Dogs seem to be as popular on a canvas these days as they are on a leash, with paintings of dogs drawing big bucks and big crowds.

At the annual “dogs only” art auction held after the Westminster Dog Show, two price records were broken this year, said Alan Fausel, vice president and director of fine art at Bonhams, the auction house that runs the event.

“Dejeuner,” a painting that shows dogs and cats eating from a large dish, set a record for the artist, William Henry Hamilton Trood (1860-1899), when it sold for $194,500, Fausel said. That record was broken an hour later when Trood’s “Hounds in a Kennel,” showing a half-dozen dogs staring at a bird outside their cage, sold for $212,500.

Bonhams’ Dogs in Show & Field auction is the only one in the country devoted solely to dogs. It was the best auction in years, Fausel said, adding: “The dog art market is certainly turning a corner.”

The William Secord Gallery in Manhattan is the only gallery in the nation dedicated to dog art.

“We have had an increase in visitors over past years, but also a substantial increase in sales compared to this time last year,” said Secord, considered the world’s foremost authority on 19th-century dog paintings.

Secord has written six dog art books and has collected over 2,500 works dating to 1805. He is also the founding director of the only museum in the country dedicated to dogs, the American Kennel Club’s Museum of the Dog. Secord opened his gallery because he didn’t want to move when the museum relocated to St. Louis.

The museum has over 700 paintings, drawings, fine porcelains and bronzes on display, and gets about 12,000 visitors a year, a number that’s been increasing steadily each year, said Barbara McNab, the museum’s executive director.

Most of the dog art sold at the annual auctions are 19th-century pieces, Fausel said, but there are a number of contemporary artists who have made names for themselves, such as Robert K. Abbett, 86, who lives in Arizona.

Several years ago, Abbett was commissioned by dog art collector Bill Nicholson of Atlanta to paint a portrait of his beloved Beauregard, a beagle who died in 2001.

“Beauregard was a soulful and loving dog,” Nicholson said.

Abbett’s 21-by-28-inch painting “is my most prized, most cherished. It’s the one that goes over the fireplace,” Nicholson said.

Nicholson has about 50 paintings. When he started collecting about 16 years ago, he spent a lot of time at antique stores and estate sales and kept an eye online. He finally decided the auction was his best bet. But he adds that he’s “very disciplined” when bidding. “You can easily spend a lot more than you are planning to,” he said.

“I am a collector who just buys charming things and puts them on the wall and enjoys them,” he said.

Abbett, who started as an illustrator, painted hundreds of dogs through the years and has had work sell for as much as $50,000.

“Animals have always been a popular subject,” Abbett said, although “you have to do what turns you on or it won’t be your best work.”

It always helps to meet the dog, Abbett said. Unlike early artists, contemporary painters have the advantage of cameras. “Photography was a godsend to an artist who could capture a scene and take it home and work on it at leisure,” Abbett said.

American painter Cassius Marcellus Coolidge (1884-1934) was known for his whimsical, cartoon-like images of dogs playing poker. The Doyle Auction House in New York sold one of them in 2008 for $602,500. But while Coolidge’s paintings and prints of gambling hounds have their devoted fans, they are not considered part of the canine art market, Secord said, because they are not realistic.

Bonhams used to include cats in its auctions, but a lack of cat paintings (and low prices) got them the boot, Fausel said.

For nearly two decades, Bonhams held its yearly auction in England, but it got “musty.” About 13 years ago, the business moved it to New York, teamed up with Westminster and renamed it, Fausel said.

The bulk of the auction pieces are 19th-century and feature purebred hunting dogs like setters, pointers and retrievers, Fausel said.

Contemporary artists go for what’s popular. A half-century ago, because of television’s “Lassie” and “Rin Tin Tin,” collies and German shepherds were popular, Fausel said. Today, it’s Labrador and golden retrievers. Historically, the Cavalier King Charles spaniel is the most popular dog ever painted, Secord said.

Secord sells original etchings for around $850 and oil paintings starting at $4,000. But dog art is not a good investment, he warned. “Buy it because you love it. If you want an investment, go to the stock market.” AP