In a world of men, books are what women want

In a world of men, books are what women want 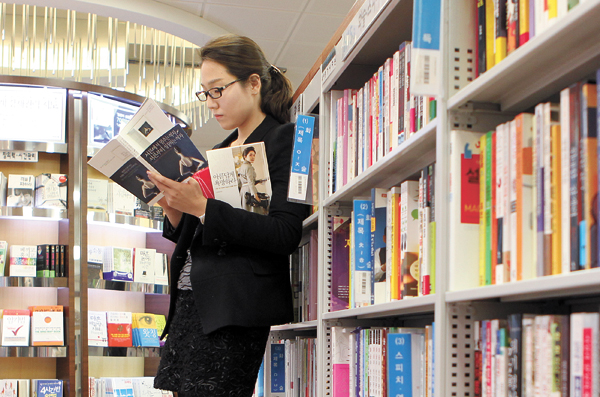 A woman reads a self-help book at the Gwanghwamun branch of Kyobo Bookstore in central Seoul. By Choi Jeong-dong


Self-help books don’t always contain warm and tender words of advice, but they now represent one of the fastest growing segments of the publishing industry in Korea and women are its biggest customers.

Offering advice on everything from work and investment techniques, to family, marriage and personal health, the books in this category are flying off the shelves. According to Internet retailer Yes24, 12 percent of the 100 bestselling self-help books last year were targeted for women.

The growth of the self-help book industry follows an increase in women’s economic participation as more women delay marriage or continue working after marriage and childbirth.

Still, women in their 20s and 30s represented just 16.7 percent of the nation’s economically active population last year, according to Statistics Korea.

But the women in this age group have grown up hearing that there is no difference between the sexes and have been encouraged to pursue successful careers.

“Women who were born between 1977 and 1982 are passionate about what they do and think of marriage as a choice and not an obligation,” said Ahn Eun-young, author of “The Women’s White Paper,” which sold more than 370,000 copies since its publication in 2006.

Young women seem especially keen for advice from self-help books, most of which are read by women in their 20s and 30s.

“When I started getting promoted, I began buying books on leadership and how to survive at work,” said Kim Na-yeon, 39, who is a deputy head of a department in a large company.

Although the entry of women into the workplace resulted in some changes to what was traditionally a male-dominated environment, many of the shifts were temporary. The majority of young women, from new hires to deputy department heads, still find they have to combat an atmosphere of sexism.

According to female columnist Han Mi-hwa, this is because women are less experienced with the “world of men.”

“Men learned the rules of survival in male-dominated societies such as the military,” Han said, adding that this is why women tend to jump from one self-help book to another.

One of the more popular books about the workplace is “The Rules of Business Communication that Men Know and Women Should Know,” which contains advice on the kind of language men use, how men work and how they think.

The current generation of self-help books also tends to contain advice on subjects that women feel they cannot discuss with friends or colleagues.

According to Ahn, author of “The Women’s White Paper,” it is not easy for women to find a female adviser, especially at work.

“There are few women who can serve as mentors in the Korean workplace,” Ahn said. “Which is why self-help books serve as ‘counselors’ for many women.”

Other books, such as “Eonni-ui Dokseol” (“Biting remarks from your elder sister”), attempt to guide women through the art of balancing work and home life.

In the book, author Kim Mi-kyung, a mother of three, also doles out an equal measure of criticism to women in their 30s.

“The problem with women in their 30s is that they mistake themselves as professional career women, when they only have worked for only five to six years,” Kim says in the book.

“They also think they should make enormous achievements that are equivalent to those made by men in their mid-40s - when they themselves are only 35 or 36.”

But as the passage indicates, she also tries to encourage readers to be more forgiving of where they are in life.

“It’s normal not to have a house when you are only 35 years old,” she wrote in her book. “Please let go of the thought that you have to achieve something big in your 30s. How long have you been working? Owning a house at your age in a capitalistic society is not normal.”

Harsh advice like this has not exactly endeared women to the self-help genre and some readers have complained.

Nam In-suk, author of “Everything in a Woman’s Life Can be Changed in Her Twenties,” which sold more than 500,000 copies since its publication in 2006, said she has received criticism from readers who felt the book didn’t always accurately reflect or respond to their experiences.

She said one reader told her that “There are parts of the book that did not suit my situation and the suggestion to ‘take what really matters and live diligently’ felt inane.”