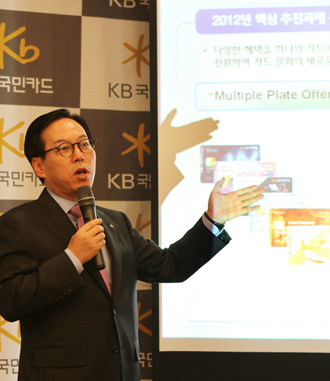 Lower credit card commission rates will result in the removal of services that are beneficial to card users, according to Choi Gi-eui, president and chief executive of KB Kookmin Card.

“Under the premise that credit card companies maintain the current level of customer services and benefits, as well as their budgets for marketing, we cannot afford to lower the rates of credit card commission fees,” Choi told reporters yesterday. He was speaking during a press conference marking the company’s first year of operations since it was spun off from Kookmin Bank as a new affiliate of KB Financial Group.

“The [controversial] issue of [lowering] credit card commission rates is a problem involving three parties - card users, card affiliates and the card company - but the top priority should be given to customers,” he said.

Last month, the National Assembly’s Legislation and Judiciary Committee passed a proposed revision of the Specialized Credit Financial Business Act. This would give the government, or more exactly the Financial Services Commission, the freedom to fix credit card transaction fees instead of letting them be decided by the market. The amended bill is currently awaiting full parliamentary approval.

“It isn’t right to judge whether credit card transaction fees are at an appropriate level in Korea compared to other countries because there are many factors that need to be considered, such as the ratio of credit card usage and check card usage [in the overall industry],” Choi said.

KB Kookmin Card’s total assets increased from 12.4 trillion won ($11 billion) in 2010 to 13.4 trillion won in 2011, while the size of its customer base has also improved since it was spun off last March. Some 10.5 million members used its services in 2010, including individuals and corporations, but this number climbed to 10.7 million last year.

Meanwhile, the total amount of its card fees also surged from 65.5 trillion won to 75.1 trillion won over the same period, according to the firm.

As part of efforts to dig up more sources of profit, Choi said the company will focus on entering the Chinese market by forming an alliance with a Chinese bank.