GENEVA - Hyundai Motor Group’s annual production of seven million cars this year is not a fluke, the group’s chairman, Chung Mong-koo said, expressing optimism about the growth of Hyundai Motor and Kia Motors in Europe.

“The annual production of seven million units is not a passing trend,” Chung told reporters after a dinner held for European dealers in Geneva Tuesday. “I believe it is because our employees worked hard and customers didn’t find many problems with our cars.” 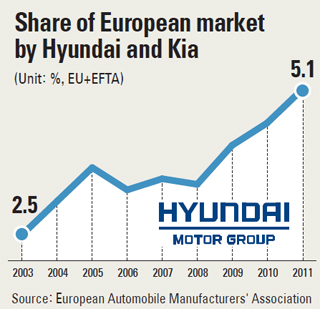 Chung was touring the European operations of Hyundai and Kia while also visiting the Geneva Motor Show. This is Chung’s first visit to Europe since last September, when he visited the Frankfurt Motor Show.

To a question over whether Hyundai can surpass Volkswagen in quality, Chung said, “I can’t guarantee that yet, but we’ll find out soon.”

At the Geneva Motor Show, Chung checked out the Hyundai and Kia exhibits and also those of his competitors, including Audi, Volkswagen, Toyota and BMW.

The popularity of the Hyundai and Kia brands is becoming more visible in Europe as hundreds of people gathered to see the unveiling of Hyundai’s electric concept car i-oniq and Kia’s Cee’d at the Geneva Motor Show.

The Cee’d is succeeding the first-generation model that sold more than 610,000 units since its launch six years ago.

Kia is betting its fate in the European market on the vehicle.

The market share of Hyundai and Kia in Europe reached 5.5 percent in January.

The European auto market has been shrinking in the aftermath of the global financial crisis of 2008.

After a presentation to introduce the i-oniq concept car, Hyundai Europe CEO Allan Rushforth held a series of interviews with the media. Rushforth said he was impressed to see a growing number of visitors at Hyundai booths at motor shows.

At the dinner for the group’s major dealers in Europe, Chung received the Top Manager in the World 2011 award from InterAuto News, an Italy-based automobile magazine. The award is given to CEOs of major automakers.

The magazine said Hyundai Motor Group made a bold move to go ahead with aggressive investment last year and continued to improve quality when its rivals were reluctant to invest.

Before the dinner, Chung held a meeting with the heads of European operations of Hyundai and Kia for four hours and asked them to find creative and bold ideas to withstand the current economic crisis in Europe.