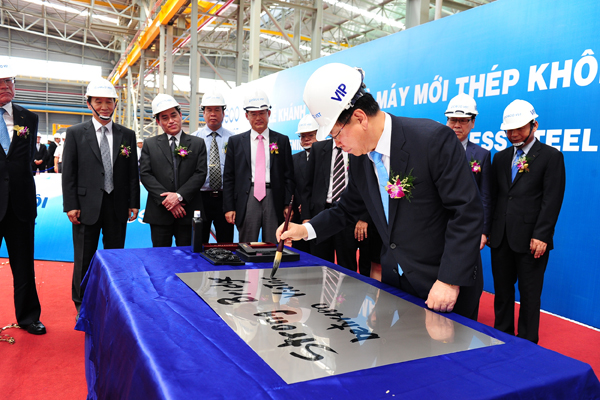 Posco CEO Chung Joon-yang writes the words “Strong Bridge Between Vietnam and Posco” at a ceremony marking the completion of a new cold-rolled steel plant near Ho Chi Minh City in Vietnam yesterday. Provided by the company


Posco has completed a new steel plant in Vietnam that will help it secure a firmer footing in Southeast Asia, it said yesterday.

The world’s No. 4 steelmaker by production said it finished building a cold-rolled steel plant with an annual capacity of 150,000 tons in an industrial complex near Ho Chi Minh City. The plant is located at the site of Posco VST, formerly known as Vietnamese cold-rolled stainless steelmaker ASC before Posco acquired it in October 2009.

The annual capacity of the new $130 million plant will take Posco’s overall production in the country up to 235,000 tons a year, it said.

“The Vietnam plant is equipped with the latest facilities to ensure a stable supply of high-quality products,” Posco CEO Chung Joon-yang said. “Posco’s operation will also contribute to the Vietnamese economy by creating jobs and reducing the country’s reliance on imported steel.”

The Vietnam branch of the Korean steel giant decided to build the new plant in order to prepare for growing demand for stainless steel products in the country. Demand currently stands at 250,000 tons a year but is expected to reach 330,000 tons by 2015.

As Posco VST plans to build a new rolling mill in 2015, it will be able to manufacture 285,000 tons of cold-rolled steel, becoming the largest stainless steel maker in Southeast Asia along with Posco-Thainox in Thailand.

Regional demand for cold-rolled stainless steel is forecast to grow from 750,000 tons a year at present to 950,000 tons by 2015. Posco’s huge production bases in Vietnam and Thailand account for 67 percent of this, making it the dominant force in Southeast Asia.

When it completes construction of another cold-rolled plant in Turkey next year, the steelmaker’s cold-rolled steel capacity will increase from 60 percent to 73 percent of its total output.

“What is significant is that we are increasing the proportion of cold-rolled steel compared to hot-rolled steel because the former is directly used for finished stainless steel products,” said Posco’s Kim Dong-wan.