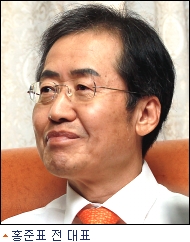 Former ruling party chairman Hong Joon-pyo survived the nomination review of the Saenuri Party yesterday amid the party’s efforts to introduce fresh faces to overhaul its old-fashioned image ahead of the April 11 legislative elections.

The party’s nomination review committee yesterday announced its third batch of nominations, revealing the names of 16 candidates. Representative Hong, who served as the chairman of the Saenuri’s predecessor Grand National Party from July to December 2011, was named to represent the ruling party in the Dongdaemun B District of Seoul.

The party also fielded Park Sun-kyu, former Blue House spokesman, for the Yeongdeungpo A District of Seoul. Park is a former journalist for KBS who served as the vice culture minister until January after his service at the presidential office.

Both Hong and Park are seen as allies of President Lee Myung-bak. While the party decided to drop nearly a dozen incumbent lawmakers who are loyal to Lee, Hong and Park survived what many Lee supporters have called a “nomination massacre.”

Hong did not apply for nomination and asked the party to decide his fate. The leadership made a strategic decision to allow the four-term lawmaker to seek reelection in his district.

Park originally sought to run in Yangcheon A District, but the party decided to field him in Yeongdeungpo A instead.

Kil Jeong-woo, former editorial writer of the JoongAng Ilbo, was chosen by the Saenuri Party to run in Yangcheon A District of Seoul, while Representative Yoo Il-ho was nominated to seek reelection in his Songpa B District. He was the first incumbent lawmaker to win candidacy in an area where the party decided to make a strategic nomination. The party so far has designated 35 constituencies as strategic nomination districts.

With yesterday’s announcement of 16 candidates, the ruling party so far has completed nominations in 118 constituencies, 48 percent of the 246 constituencies. Including 47 constituencies where primaries are to take place, the party has 128 districts to go.

Despite speculations that the party will unveil its candidates in its stronghold of the Gyeongsang region, Busan and Daegu, particularly the fates of incumbent lawmakers who are Park loyalists, yesterday’s list only included a few of those districts.

Jung Hong-won, head of the nomination committee, yesterday said that this does not necessarily mean that the party will insist on new blood when making nominations in those areas.

Jung also turned down the failed contenders’ demands to know the evaluation outcomes.

“It’s a matter of lawmakers’ honor,” he said. “If we make the data public for one or two people, it is possible that all the data will be revealed, so the demand is inappropriate.”

Jung said opinion polls and performance reviews are used as primary tools. For contenders who pass the first step, the review committee takes into account ethics and their reputation in constituencies and decides the final candidates through the full-panel discussion of the review committee.

The aftermath of the nomination, however, continued to worsen yesterday as culled candidates threatened to run independently or create a new party. In his interview with CBS radio, Kim Hyun-chul, the second son of former President Kim Young-sam, said he may even form an alliance with the ousted candidates in the opposition Democratic United Party to run in the April elections. Kim left the Saenuri Party on Tuesday to protest its decision to not nominate him,