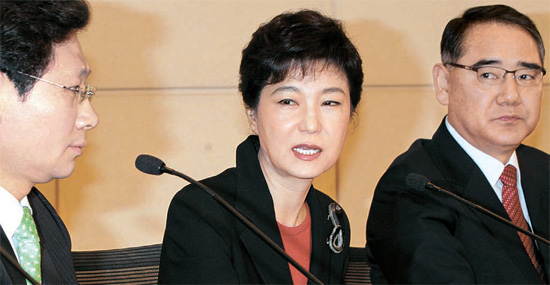 Park Geun-hye, the ruling Saenuri Party’s interim head and a presidential frontrunner for the conservatives, yesterday drew her sword against potential liberal rival Moon Jae-in, questioning his “political philosophy” for having made a turnabout on the legacy of the Roh Moo-hyun administration.

Park delivered one of her sharpest criticisms toward Moon, who served as former chief of staff of the Roh Blue House, in a debate at the Kwanhun Club yesterday.

In the session hosted by the veteran journalists’ association, Park talked about other sensitive political issues including the opposition Democratic United Party’s attacks on her and the growing fissure in her party over the nomination outcomes for the April 11 legislative elections.

“Recently I have had some doubts about this man,” Park said of Moon, currently serving as the DUP’s senior advisor. He is also the party’s candidate in the Sasang District of Busan, but speculations were high that he could be a liberal presidential contender to face Park.

“Because he was the representative chief of staff of Roh, I think he is the man who has the best knowledge of Roh’s political philosophy and policies,” Park said.

“But recently, Moon has been opposing the Korea-U.S. free trade agreement and the construction of a naval base in Jeju, pushed forward by Roh for the sake of the national interest. It is hard to understand his about-face.”

She said it is more important for Korea to seek gains in the American market as the accord will take effect next week.

“If there are shortcomings, then we should revise it through discussions,” she said.

Park also defended the government’s plan to go ahead with the naval base construction in Jeju because it was a decision that would benefit the country.

She furthermore shot back at Moon for having criticized her over the Chungsu Foundation, a scholarship fund where Park once served as the chairwoman. Speculation that then-President Park Chung Hee forced a civilian to build the foundation is a highly sensitive issue as the late former president was her father.

Though slashing on the subject of Moon, Park kindly evaluated Ahn Cheol-soo, dean of the Seoul National University Graduate School of Convergence Science and Technology who recently has risen as a political star for the liberals.

“It is important to listen to the people and improve communication,” she said. “And it is great to see his efforts toward that.”

She, however, refused to discuss whether Ahn should make his stance more clear whether or not he will run for president.

“It’s not my job to evaluate what attitude he assumes,” Park said.

She also said she had told her aides it was inappropriate to attack him politically since Ahn has not declared his intention to participate in politics.

At the debate, she also talked about the growing resistance from Lee Myung-bak loyalists who failed to win Saenuri nominations in the upcoming elections.

“I assure you there was no pro-Lee or pro-Park concept in the nomination evaluation,” she said.

Stressing that the nomination process is fair and transparent, Park said she gave independence to the nomination review committee, dismissing the skepticism that her influence was reflected in the candidate choices.