Defector tells story in book out in France

Defector tells story in book out in France 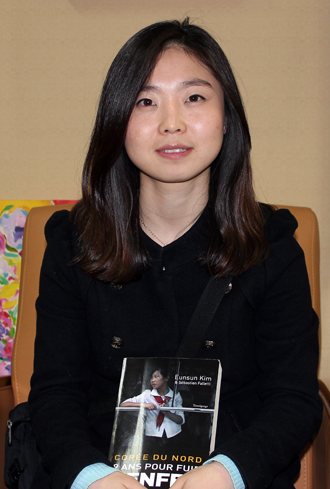 PARIS - A North Korean defector recently published a book about her nine-year journey to reach South Korea from her communist homeland, saying she hopes to raise awareness of the plight of others like her.

The book, co-written with a French journalist in Seoul, tells the story of the defector who goes by the name of Kim Eun-sun.

She fled the North with her mother in 1997 after two earlier unsuccessful attempts, and hid in China before arriving in the South nine years later.

Titled “North Korea: The Nine-Year Escape from Hell,” the book has grabbed the attention of French media as a rare introduction to the hardships of North Korean defectors.

“I wrote this book in order to make more people aware of the real state of affairs in North Korea,” Kim said during a press conference held Tuesday (local time) at the Korean cultural center in Paris.

“I’m grateful for the interest of the French media. I hope the French people will come to understand the reality of the situation in North Korea and join efforts to solve the problem.”

The campaign to help North Korean defectors gained momentum in recent weeks with protests in Seoul and other countries demanding China stop repatriating the refugees to their homeland, where they are said to face harsh punishments and even execution.