Jeju base building begins with bang

Jeju base building begins with bang 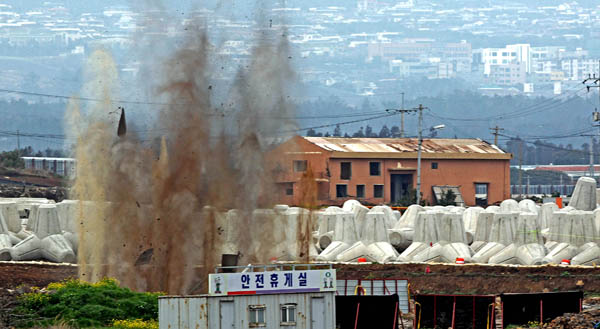 A second round of explosions go off yesterday afternoon at the naval base construction site in Gangjeong Village, Jeju Island, after being delayed by politicians and civic activists who oppose the base. [YONHAP]


JEJU ISLAND - With a deafening thump, 112 simultaneous explosions ripped through the stony seashore of Gangjeong Village on Jeju Island yesterday morning at 11:22 a.m., blowing debris as high as 20 meters (65 feet) in the air. 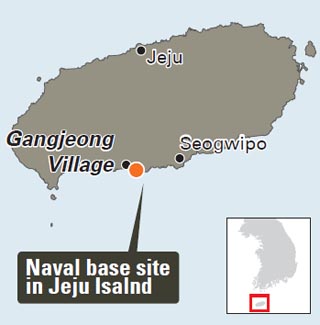 The explosions signaled the beginning of full-scale construction of a naval base on Jeju that has become a flash point between the government and the opposition.

About 70 protestors were at the scene when the explosions went off. Some of them collapsed to the ground in despair.

Around 600 kilograms (1,300 pounds) of explosives were used by the Navy for the stone-clearing yesterday, and the police set up a barricade with a 100-meter radius around the site of the demolition.

Around 150 residents opposed to the base staged rallies from as early as 3 a.m. yesterday in various locales, including Andeok-myeon, Seogwipo, which has a gunpowder manufacturing assembly that provided the explosives. 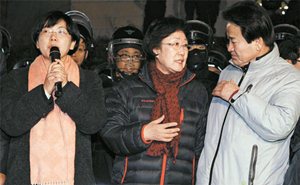 “The Navy has pressed ahead with the destruction of the Gureombi seashore, which is opposed not only by people in Gangjeong but all Jeju residents,” said Gang Dong-gyun, head of the village. “Breaking Gureombi stones equals breaking the peace in Jeju and the lives of Gangjeong residents, so the residents will fight to the end. The government and the Navy are disregarding the voice of Jeju.”

The construction of the naval base on about 530,000 square meters (130 acres) of land near Gangjeong Port at a cost of 977.6 billion won ($869 million) is facing stiff resistance from a disparate group that says the base threatens the peace of Jeju Island. The government, which has finished paying compensation to former owners of the land, says the base is needed to boost national defenses in the South Sea.

Late last month, the Lee Myung-bak administration gave the go-ahead to the start of full-scale construction, insisting on its completion by 2015.

Local residents have been joined by liberal activists and religious leaders from all over Korea in what has become a nationwide anti-government movement.

Chung Dong-young, former chairman of the largest opposition Democratic United Party, and Lee Jung-hee, co-head of the labor-friendly Unified Progressive Party, were among those protesting yesterday.

Some Jeju residents, however, were dubious about the politicians’ involvement in the protests.

“Politicians who are not really interested in the issue of the Navy base only visit Gangjeong Village during election season,” said Kim Hak-cheol, a 63-year-old resident. “I want to see politicians resolve this issue in a reasonable manner instead of trying to create conflict.”

One resident said a majority of residents welcomed the project at the time it was announced in 1993 and that proponents still outnumber opponents.

A 58-year-old taxi driver named Park said he wants to see the construction completed as soon as possible because the base will bring more people to the island. Yun Tae-jeong, who was the head of Gangjeong Village when it was selected as the site of the base in 2007, said the politicians don’t represent the true sentiments of the locals.

“Unless outside forces leave here,” he said, “the disorder in Gangjeong Village cannot but continue.”