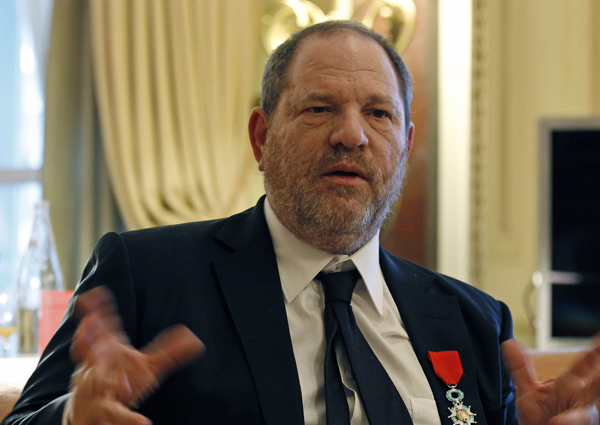 Harvey Weinstein in Paris on Wednesday, the same day he received the Chevalier of the Legion of Honor from French President Nicolas Sarkozy.[AP/YONHAP]


PARIS - Harvey Weinstein says “The Artist” is just the beginning.

“France is about to have a golden age of cinema,” said the Hollywood titan, who produced the French-born silent film that captured the world’s attention as well as five Academy Awards, including best picture.

Weinstein told The Associated Press on Wednesday that his optimism is driven in part by a French law cracking down on the Internet piracy that has strangled the U.S. movie and music industries.

The expansive New Yorker was feeling particularly well-disposed to France after a Paris party celebrating “The Artist” this week and getting the esteemed Legion of Honor award from French President Nicolas Sarkozy on Wednesday.

Sarkozy turns out to be a big movie buff, and Weinstein said that when they met, the French leader quoted from a five-hour documentary Weinstein and Martin Scorsese once made, and praised Danish silent filmmaker Carl Dreyer.

“He sees a movie almost every day .?.?. He understands that movies can change somebody’s life,” Weinstein said.

Sarkozy’s office wouldn’t comment on the meeting with Weinstein, other than to say it took place.

Sarkozy, facing a tough bid for reelection next month, also understands that French cinema would be in much worse shape without government subsidies, and made a point of saying so in a congratulatory letter to the “Artist” Oscar winners.

Thanks to that government support, the success of “The Artist,” and especially the anti-piracy law that Sarkozy championed, “France is having its most robust cinema on a global basis than at any time,” Weinstein said.

“Sarkozy has the guts to go and make the toughest content law in the world,” he said. “It’s given French cinema a rebirth.”

The French law allows authorities to cut off Internet access to people who download illegally, with a three-strikes-and-you’re-out system. Entertainment companies have cheered it but critics say it threatens civil liberties and is difficult to fairly enforce.

Sarkozy also asked about Weinstein’s upcoming film “Bully,” a documentary examination of school bullying that follows five kids and families over the course of a school year.

“That it’s on the French president’s radar tells me, wow, we are having a bigger impact than I thought,” he said.

In the United States, Weinstein is protesting the R rating given to the film because of six expletives. Such a rating means kids under 17 can’t see it without an adult - which Weinstein says defeats the purpose of the film by limiting its accessibility to those it speaks to most: adolescents.

“I’m sure in France it would be rated G. They’d put it on TV. They would say this is really important for the social fabric,” he joked.

Weinstein says “The Artist” paved the way for another Oscar breakthrough: a foreign film - with dialogue next time - winning the best picture award. “The Artist” was made by a French director and with French leading actors, but wasn’t relegated to the foreign film category that most non-English films fall into because it was silent.

“We’ll break that barrier, too. Whether it’s me or somebody else,” Weinstein said in a suite in the Ritz Hotel on tony Place Vendome, his Legion of Honor medal pinned to his chest. “This is a step in the right direction.”

He predicted more silent films and other “daring works of art” to come from Hollywood, too.