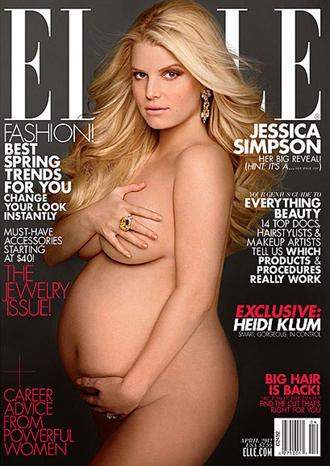 LOS ANGELES - A pregnant Jessica Simpson has taken a page from Demi Moore’s celebrity playbook in a nude cover photo for the April issue of Elle magazine. The singer and actress has confirmed the baby will be a girl.

In the cover photo released by the magazine on Wednesday, Simpson can be seen covering her breasts with her right arm and hand, and cradling her full abdomen with her left.

She wears rings and dangling earrings, and her blond hair flows over her shoulder and chest.

A photo inside shows Simpson standing as her fiance and the father of her unborn child, pro football player Eric Johnson, kisses her belly.

Simpson, 31, revealed in October that she was pregnant with her first child after dating Johnson since May 2010.

She first rose to fame at age 19 with her debut album “Sweet Kisses” in 1999. She married singer Nick Lachey of boy band 98 Degrees in 2002, and the two starred together in a reality TV show about being newlyweds. They divorced in 2006.

As it happens, Lachey revealed this week that his current wife, TV personality Vanessa Lachey (formerly Minnillo), is pregnant with the couple’s first child.

Simpson’s Elle cover photo is similar to an attention-grabbing nude pose actress Demi Moore, who was pregnant at the time, struck on the cover of Vanity Fair in 1991. At the time, the Moore picture taken by renowned photographer Annie Leibovitz caused a controversy, but since then, a number of other pregnant stars have posed for similar shots.

The April issue of Elle featuring Simpson officially hits newsstands on March 20. Inside the magazine, she reveals that she is pregnant with a girl, confirming previous speculation.