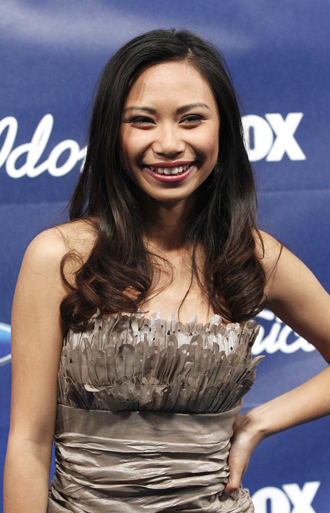 The 16-year-old San Diego high school student’s assured version of “I Will Always Love You” was “just amazing. I don’t even know what to say,” Jennifer Lopez exclaimed during the performance show.

“Jessica, you may be the one. You just made 40 million people cry,” Tyler said, adding a dose of hyperbole by roughly doubling the show’s biggest Wednesday night audience for the season so far.

Randy Jackson didn’t hold back either, calling Sanchez “one of the best talents in the whole country.”

On the Fox show’s 400th episode, the men tackled Stevie Wonder’s catalog, and the women choose from Houston’s hits, a tribute to the singer who died Feb. 11 on the eve of the Grammy Awards at age 48.

“I Will Always Love You” was played at the conclusion of Houston’s New Jersey church funeral last month.

The “American Idol” finalists performed as the Fox show marked its 400th episode. In a twist, the male and female singers who rank lowest in the audience vote will be announced Thursday, and the judges will decide which of the two will be bounced.

Others who impressed the judges include Joshua Ledet, 19, of Westlake, La., with his version of “I Wish’’; Hollie Cavanaugh, 18, of McKinney, Texas, with “All the Man I Need’’; Colton Dixon, 20, of Murfreesboro, Tenn., with “Lately”; and Phillip Phillips, 21, of Leesburg, Ga., with “Superstition.”