Growing tide of discontent in the tell-all era

Growing tide of discontent in the tell-all era 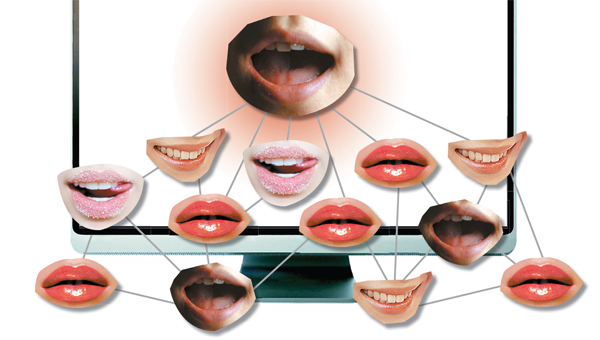 In the digital era, telling your story to the world has never been easier. Log onto your favorite social networking service and with a few clicks you have a ready-made audience for your every complaint or personal slight. If your story is juicy enough, you are instantly rewarded with a flood of sympathy, notoriety or even fame.

In a recent incident that went viral on the net, a mother of two claimed that a female customer burned her son with a bowl of hot soup. But as revealed by CCTV footage of the incident, above, the woman was refilling her bowl when the boy started running in her direction and the two collided.

Whether the story is true, however, is another matter. Few people double check facts and there is little regulation on rumor mongering. Yet the practice represents a disturbing trend that seems to be on the rise, and the consequences are becoming ever more serious.

Most recently, a mother of two attracted attention when she made scathing comments about a woman who was eating at the same restaurant after her son was burned with a bowl of hot soup.

According to a long post she wrote on Nate.com, the mother and her two children were dining out at a restaurant in central Seoul in late February. The son left the table to get some water when she heard him shriek. When the mother rushed over, she saw her son’s face had been scalded by a bowl of hot soybean paste soup the woman had been holding and the mother came to the conclusion that the accident was the woman’s fault.

She also accused the woman of running away, saying, “that ajumma [middle-aged woman] just left the scene, saying that her hands were burned.”

In her post, the mother described the incident as a “terror attack” and wrote that her son is suffering from the trauma, comparing his injuries to those of the titular character in “The Hunchback of Notre Dame.”

Alongside the text, she uploaded pictures of her son’s burned face taken from his hospital bed.

The post spread quickly around the Web and enraged netizens, who branded the woman the “gungmul-nyeo,” or “soup lady.” The soup lady instantly became public enemy No. 1 and her nickname was the top keyword search on many Web portals.

But it wasn’t long before the tables were turned and the soup lady became the victim in the scenario.

Soon after the mother’s tirade hit the Net, Jongno Police released CCTV footage of the incident to the public. In the video, the boy can be seen running through the restaurant and colliding with the woman just as she is turning around with the soup.

The woman brought her side of the story to the police after she realized she had been labeled a “heartless child abuser.” She also said she had been burned in the incident. The case is still ongoing.

In another widely reported incident from early last month, the story of a pregnant woman who accused a restaurant worker of assault went viral after she posted her story on the Web.

The woman, surnamed Yoo, who was six months pregnant at the time, posted a message on her Twitter account saying that the server insulted her, pushed her onto the floor and kicked her in the stomach.

She also lambasted the restaurant, Chaesundang, a franchise in Cheonan, South Chungcheong, causing it to close its doors the next day. The incident also dented business at other franchises, with about 270 franchise owners reporting a dramatic decrease in sales the same day.

But a police investigation revealed that the server had not kicked Yoo in the stomach, although she did admit to having pushed Yoo.

Yoo later confessed to the police that she had fabricated her story and said, “I didn’t know that the case would become this big.”

A spokeswoman from Chaesundang said it was difficult to speak about the incident because of the ongoing investigation, “But everything went out of control in an instant. Yoo made the post on Feb. 17 and it was published by the media the next day.”

She said the company had been thinking about launching an advertising campaign on social networking services, but the incident made her rethink the value of spreading information on the Web, no matter what the content.

“We were thinking about using social networking services for marketing, but we became overwhelmed,” she said. “We weren’t ready for this type of thing, which is a first for us.”

Experts say that the fact that users can receive instant feedback on the Internet encourages people to take their every complaint to cyberspace.

“People can easily vent their anger on the Internet, which heightens the sense of excitement people feel in telling their stories,” said Kwak Geum-ju, a professor of psychology at Seoul National University. “It’s a familiar feeling. When you talk about someone you don’t like behind their back, you feel a similar sense of relief.

“But if it took a long time to get feedback, as when you’re suing someone, I don’t think as many people would do it, because they have time to think about what happened from a different point of view and cool down.”

Kwak said that humans are designed to respond more quickly to negative rumors than to positive ones.

“People easily believe in rumors. It’s a basic human instinct,” she said. “In addition to that, negative rumors are more entertaining than positive ones. It’s like the saying that one person’s misfortune is another person’s happiness.”

Another expert asserts that changes in the media environment, led by the advent of Internet-based media outlets, has contributed to the current trend.

“In the old days, you had to have the infrastructure, such as a rotary press, to run a newspaper company, but anyone can launch a newspaper online these days,” said Hwang Yong-suk, a professor of mass communications at Konkuk University.

“Now, all you need is a laptop and a couple of reporters who can increase traffic using popular keywords. Reporters don’t go out for interviews, they just use secondary data without fact checking. It’s copy-and-paste journalism and it’s a low-cost industry that’s easy to break into. And Internet media outlets aren’t regulated by the government, either.”

According to the Ministry of Culture, Sports and Tourism, anyone can register a site as an online newspaper company. All they have to do is meet a couple of simple requirements, such as employing three full-time staff members.

Traffic equals money for these online media outlets and they compete with arresting and oftentimes sensational stories, most of which go unverified.

“These online media outlets definitely contribute to the current trend of ‘Internet disclosure’ by facilitating the spread of false news,” Hwang added. “I’d say they’re more than 50 percent responsible for the trend.”

With smartphones nearly everywhere around the country, we could see another soup lady incident in the near future.

According to the National Police Agency, the cybercrime rate is on the rise. There were a total of 77,099 cybercrimes, including hacking and Internet scams, reported in 2004, but the figure soared to 103,809 in 2010.

Unfortunately, the rate is likely to continue to increase because the real-name policy, which was implemented in July 2007 to prevent malicious comments online, is likely to be scrapped later this year.

The possibility that the law would be scrapped was mentioned late last year by the Korea Communications Commission as it was reporting its New Year tasks to President Lee Myung-bak. The KCC said it was reviewing whether to keep the policy, citing privacy issues, but industry insiders say it is highly unlikely it will be discarded.

Under the current real-name policy, anyone who wants to leave a comment on state-run Web sites and major Web portals must first register their real names and identification numbers.

“I’m concerned about the scrapping of the real-name policy. Without it, it will be very difficult to track a person who spreads rumors,” said an official at the National Police Agency who is in charge of investigating cybercrimes and asked to remain anonymous. “If someone starts posting malicious rumors using a public computer in a PC room, it will be hard to catch them.”

Kwak, the sociology professor from Seoul National University, laments the rampant abuse of the Internet and social networking services.

“The incidents with the soup lady and the pregnant woman certainly represent the downside of the Internet and social networking services,” she said. “These services could be used more wisely, but we’re not doing it.

“Some netizens have probably learned that the information on the Web is often biased after seeing what happened with the soup lady and the pregnant woman, but it’s hard to expect that all Internet users will come to the same realization. That will take a long time and we’ll certainly see more victims before then.”

Whether any of this will change people’s behavior in public remains to be seen, so people should cultivate an awareness of themselves and their surroundings, according to Kim Bong-seob, a senior researcher at the National Information Society Agency.

“We’re living in a glass house. Your every word and action could be uploaded by anyone at any time,” Kim said. “The best practice in the digital era is to be conscious of everything you say and do.”