All pain, no gain for drug makers

All pain, no gain for drug makers 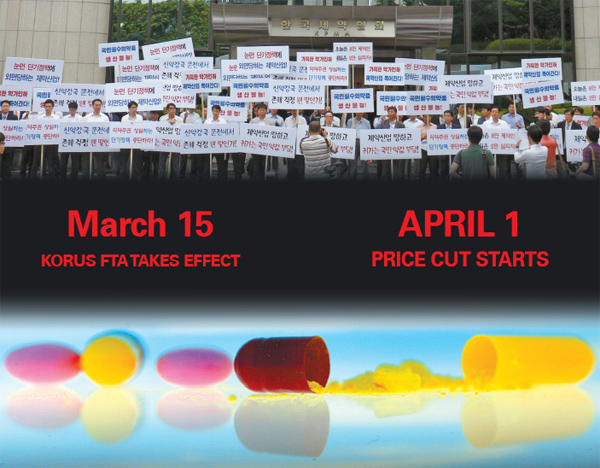 This is likely to be a grueling year for Korean pharmaceutical companies as they feel the brunt of government-imposed price cuts and the stepped-up competition that is sure to follow the implementation of the Korea-U.S. free trade agreement next week.

The Ministry of Health and Welfare announced last month that it will lower the prices of 6,506 different pharmaceutical drugs by 14 percent from April 1 as part of its plan to cut budget spending on national health insurance.

Despite opposition from the drug-making industry, the ministry plans to go ahead with the measure, saying that national health insurance premiums will drop from 5.9 percent to 2.8 percent this year. It also believes drug firms will be able to weather the storm by cutting unnecessary spending to offset possible falls in profits.

However, according to reports recently released by financial institutions, the government’s policy of cutting drug prices is forecast to have a significant impact on domestic drug firms’ bottom lines.

According to Woori Investment & Securities, the nation’s average drug manufacturers are likely to see their combined sales fall by around 80 billion won ($72 million) this year.

Both companies’ total sales are forecast to plunge by more than 5 percent this year.

A more serious problem for domestic industry players is the threat of falling operating profits, said Lee Seung-ho, a research fellow at Woori.

Hanmi Pharmaceutical, the fifth-biggest local drug maker, barely managed to post a profit of 2.7 billion won last year but is likely to see its sales plummet by 45 billion won in 2012 due to the policy, causing its operating profit to nosedive.

Korea Investment & Securities projected that the so-called “big five” drug makers in Korea will see their net profits plunge 47.7 percent on average this year. Hanmi is forecast to face the sharpest fall of 179 percent, while Daewoong and Dong-A are likely to see cuts of 47 and 17 percent, respectively.

“Our attempts to communicate with the ministry have proven a failure, so we have no other recourse but to file the suit,” the association said. It is reportedly now in talks with four major law firms regarding taking legal action.

Adding to the current controversy over government policy, the Korus FTA that goes into effect next Thursday is infuriating drug makers even more.

The deal stipulates that a drug firm can file a complaint with the Health Insurance Review & Assessment Service if it finds the price of its product as determined by the agency to be unreasonable. The company then can determine the price with a third-party stakeholder rather than with the government.

The U.S.-based Pharmaceutical Research and Manufacturers of America argue that Seoul is not applying the clause to all drugs in the country, while local manufacturers are concerned that their U.S. rivals intend to raise the prices of their products to take advantage of the clause.

According to the magazine Inside U.S. Trade, U.S. Trade Representative Ron Kirk said in a letter to Senator Orrin Hatch last month that Washington will discuss the matter with the Korean government unless further measures are arrived at.

“What he meant is that we will keep holding discussions when such controversial issues arise, as both sides still have different views on some of the clauses,” Trade Minister Bark Tae-ho said yesterday.