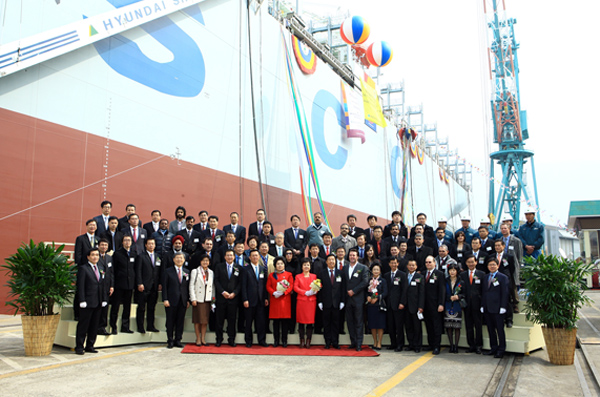 Hyundai Heavy Industries held a ceremony at its headquarters in Ulsan yesterday to name the”Cosco Faith,” a 13,100 TEU container carrier, as it celebrated building vessels weighing a total of 100 million GT over its 40-year history. Provided by the company


Hyundai Heavy Industries has set a new milestone in terms of vessel delivery weight two weeks ahead of its 40th anniversary, the world’s No. 1 shipbuilder announced yesterday.

Hyundai Heavy said it held a ceremony to mark it having surpassed 100 million gross tonnage (GT) in ship deliveries at its headquarters in Ulsan.

The company recorded 107.17 million GT, exceeding the 100 million mark almost exactly four decades after it was founded on March 23, 1972. It is the only shipbuilder to achieve the feat, it said. 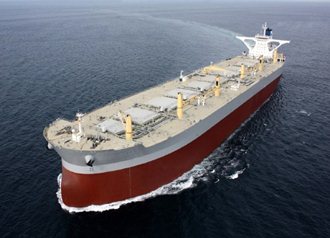 The company has delivered 1,805 ships to 285 shippers in 49 countries throughout its history. It said it has grown by sparing no effort to hone its shipbuilding capabilities and add new techniques such as building vessels onshore and constructing T-shaped docks.

The record also means that Hyundai has single-handedly eclipsed the aggregate global shipbuilding volume of all of its rivals, which stood at 100.40 million GT as of the end of last year.

“This figure is equivalent to how much water it would take to fill 59 football stadiums, or 3.2 million public buses in Seoul,” said a Hyundai official at the company.

“This milestone serves as an opportunity to show that we possess world-leading technological prowess and competitiveness, while also raising the global status of the Korean shipbuilding industry,” the official added.

The shipbuilding giant has established 11 dockyards in Ulsan and Gunsan, where it constructs over 100 vessels a year. Its maximum annual capacity stands at 13 million tons, which the company claims is the largest in the world.