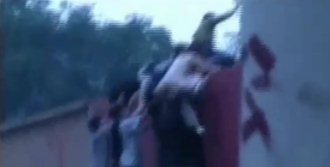 A South Korean opposition lawmaker revealed yesterday that a group of 50 North Korean orphans defected from their impoverished homeland late last month, though it is not known whether they have been caught by Chinese authorities.

Rep. Park Sun-young of the conservative minor Liberty Forward Party said 50 children fled from an orphanage in the northern Yanggang Province in late February, adding she has been holding the information acquired from sources in China for their safety.

“Fortunately, I haven’t heard that they were caught [by Chinese authorities],” Park told Yonhap by phone.

Among the defectors, Park noted, 20 were caught near the border and severely beaten by North Korean authorities, while the rest of them have not yet returned to the North.

The 56-year-old also claimed that an additional 14 North Koreans were reportedly arrested in China, raising the total number of defectors facing repatriation to their homeland to at least 48.

The journalist-turned-lawmaker, who collapsed last week after 11 days of a hunger strike in front of the Chinese embassy, denounced liberal parties’ inaction for the human rights issues in the communist state.

“Although [the liberal parties] always talk about human rights, they are showing an anachronistic attitude by remaining silent over the rights of North Korean defectors,” said Park, who is now under treatment in a Seoul hospital for dehydration and malnutrition. “Staying mute over North Korean defectors’ rights is not so different from inhumane actions such as torturing and killing [them].”

Tens of thousands, perhaps hundreds of thousands, of North Koreans are believed to be living in hiding in China after fleeing their communist homeland, hoping to settle in South Korea. China regards them as economic migrants, not as refugees, and repatriates them when caught.

The number of new arrivals, comprising 99 women and 61 men, amounted to 70 percent of the monthly average of 228 last year, according to the Unification Ministry, which handles inter-Korean affairs.

The figure also amounted to 72 percent of the monthly average of 223 over the past five years, the ministry said.

The main cause appeared to be a significant reduction in the pool of defectors hiding in China with hopes of resettling in South Korea, analysts said.

“The number of North Korean defectors in China has dropped to about 15,000, equivalent to 10 percent of their numbers four or five years ago,” said Yun Yeo-sang, an official at the Database Center for North Korean Human Rights in Seoul. “There has been a large increase in the proportion of new arrivals who have family or relatives already resettled in the South, [thus] the size of the defecting population has decreased, but there is a constant stream of [North Koreans] wishing to come here.”

More than 23,000 North Korean defectors have settled in the South in recent decades after traveling through China, Thailand and other Southeast Asian countries. The Koreas are split by a heavily fortified border as a result of the 1950-53 Korean War that ended in an armistice, not a peace treaty.

South Korea has a long-standing policy to accept any North Korean defectors seeking a permanent home.

The campaign to help North Korean defectors gained momentum in recent weeks with protests in Seoul and other countries demanding China stop repatriating the refugees to their homeland, where they are said to face harsh punishments and even execution. As Pyongyang’s key ally, Beijing classifies the defectors as illegal migrants, not asylum-seekers.

Activists in Seoul said the drop in defector arrivals could be more than temporary, as the Pyongyang regime appears to have toughened crackdowns on defectors following the December death of leader Kim Jong-il.