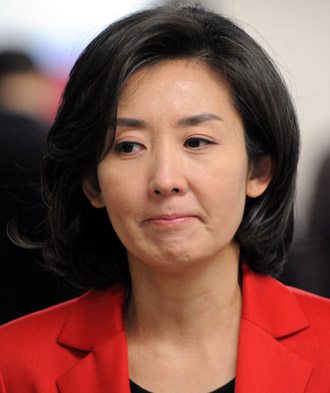 Na Kyung-won, a potential candidate for the Saenuri Party in the upcoming April legislative election, dropped out of the race yesterday after suspicions that a prosecutor received a request to indict a netizen who had defamed her from Na’s husband - a Seoul court judge - turned out to be true.

“I sincerely apologize to the nation and members of the Saenuri Party for disappointing them,” Na said during a press conference held in the National Assembly in Yeouido, western Seoul. “I judged that my participation in the election would influence the party badly.”

Just last Thursday Na denied the allegations, saying “No such request was made by my husband.”

However, she then decided to step down yesterday, four days after prosecutor Park Eun-jeong, 40, of the Bucheon branch of the Incheon District Prosecutors’ Office admitted to receiving a request from Judge Kim Jae-ho at the Seoul Eastern Court to indict a 50-year-old netizen surnamed Kim on charges of slander in 2005 via a written statement.

According to the Seoul prosecution, Park handed in the statement on Wednesday and testified that “I put a post-it note that read ‘the case requested by Judge Kim Jae-ho’ on documents related to the case when I passed the case over to prosecutor Choi Young-woon at the Daegu District Prosecutors’ Office in January 2006.”

The prosecutors said the case was assigned to Park in Dec. 2005 when she was working at the Seoul Northern District Public Prosecutors’ Office and was passed to Choi a month later before she took maternity leave. Choi indicted the netizen in April.

The suspicion first surfaced in October last year during the Seoul mayoral by-election, which Na lost to Mayor Park Won-soon, and was once again discussed by political podcast “Naneun Ggomsuda,” (I’m a Petty-Minded Creep) on Tuesday.

The Seoul Metropolitan Police asked Choi about the existence of the post-it note when Na filed a lawsuit against Sisa-IN magazine reporter Joo Jin-woo, who brought the issue up as a guest on the “Naneun ggomsuda” podcast in October. At the time, Choi told the police via phone that “no such post-it note was found with the documents.”

However, Choi raised suspicions regarding the issue recently by changing his words, telling the media “I can’t remember details because I handled the case long time ago.”

The police sent questionnaires to prosecutors Park and Choi on Wednesday and will decide whether they are going to summon Judge Kim Jae-ho based on their answers by next Tuesday.

In August 2005, the 50-year-old netizen Kim insisted through his blog that Na made a pro-Japanese judgment when she was a judge. The post said that she had ruled in favor of descendants of Lee Wan-yong, the late Joseon Dynasty (1392-1897) minister who signed the annexation treaty with Japan when they filed a lawsuit against the country to seek the restitution of inherited land that was owned by the government.