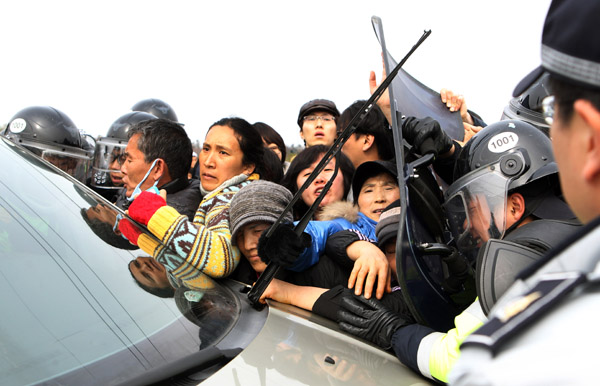 Activists who oppose the Jeju naval base construction try to stop a police car from taking fellow protesters away from the demonstration site, yesterday. [YONHAP]


JEJU ? The sound of intermittent explosions reverberated through Gangjeong Village in Seogwipo yesterday afternoon. In between the blasts, arguments disturbed what otherwise might have been a quiet town.

“Stop the opposition for the sake of opposition now,” chanted hundreds of people gathering in a park in the village. Another group standing across the 30-meter-wide (98 feet) Gangjeong Stream that runs through the park shouted, “Constructing a naval base is not a partisan matter!”

As the Navy pushed ahead with land-clearing work on the site of the controversial naval base for the second day in a row, around 100 opponents including residents, religious leaders and civic group activists gathered near the site to protest.

Their protest, in turn, attracted around 400 conservatives to call on the government to go ahead with the plan.

The Navy yesterday set off explosives to clear the ground at 12:23 p.m., and three more times until 1:16 p.m. A day earlier, there were six explosions.

Tensions were high because of the possibility the two sides would attempt physical sabotage against one another, but the police dispatched around 500 police members to the scene to prevent conflict.

“The project, a government policy decision in the interests of national security and the development of Jeju, is being illegally obstructed by only a portion of the residents, pro-North leftists and professional demonstrators,” one of the proponents said during the rally.

The proponents also held a press conference in front of the Jeju City Council early yesterday and called on the city government to stop fighting with the central government and rally for the construction of the naval base and the development of the nearby areas.

The 977.6 billion won ($873 million) project will construct a civilian-military tourist harbor on about 530,000 square meters (130 acres) of land near Gangjeong Port which can accommodate a 150,000-ton cruise ship, but the Jeju Provincial Government is requesting a temporary suspension of the project, saying the current design of the base won’t accommodate ships that size.

Meanwhile, the Navy said it will be leveling ground for construction over three months. The Navy was initially scheduled to start the demolition 13 months earlier. About four or five explosions will take place each day, the Navy said.