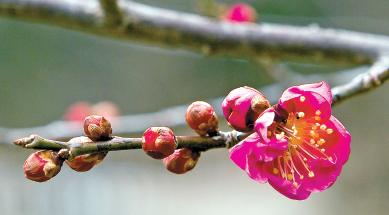 
The unpredictable winter weather created a bit of confusion in the plant world regarding the arrival of spring. Well-known spring heralds, such as the camellia flowers on Wando Island in South Jeolla, opened their buds slightly in January but soon closed in a hurry due to the chilly winter wind.

Now that the weather is warming up, there are signs of spring around the country as plants and trees begin to blossom.

The JoongAng Ilbo recently journeyed to three areas in the south where spring has come early, including Wando Island, Cheongsan Island and Geumdun Temple.

Geumdun Temple in Suncheon, South Jeolla, is also ready to welcome the spring with its red plum blossoms, which are the first flowers to bloom nationwide. It is said that scholars in the past loved this flower due to its unwavering integrity, as seen by its ability to bloom through the piercing wind and cold snow.

On our visit to South Jeolla Wando Arboretum, located on Mount Sanghwang in Wando, the surrounding area was hit by a snowstorm. But we were still able to see some beautiful Adonis plants near the top of the mountain on a tour with Oh Chan-jin, the arboretum’s research director.

The arboretum also supports a camellia forest, where we saw some deep blue leaves and red and white buds.

After walking through the woods with Oh for 20 minutes, we suddenly had a grand view of the nation’s largest warm-temperate forest, which has a dense stand of broad-leaf evergreens such as camellias and silver magnolias.

Going up a little further, we saw 20 to 30 Adonis that had bloomed through a heavy winter wind.

“They’re so beautiful, aren’t they? It takes them six years to bloom for the first time,” Oh said.

He also said that people have been picking the flowers, with some even digging up the roots, which is depleting the forest.

While climbing down the mountain along the valley, we were struck by the orange witch hazel and had to stop for a moment. The flowers, which usually bloom in March, had a strong fragrance despite also having a slight tininess.

South Jeolla Wando Arboretum is open daily from 9 a.m. to 6 p.m. Admission is 2,000 won ($1.80) for adults and 1,000 won for children. The arboretum has a walking course through a warm-temperate forest. It takes around three hours to see everything. Guests can engage the services of a forest guide, but reservations must be made at least a week in advance. For more information, visit www.wando-arboretum.go.kr or call (061) 552-1544. The Camellia Nature Exploration Area is a 30-minute walk from Wando Arboretum. For details, call (061) 550-6322. 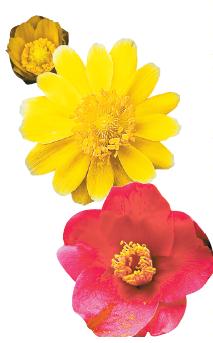 On Cheongsan Island, the fields are the first to greet spring. The fields are currently full of sprouting rape flowers, garlic and barley, which were planted last autumn.

Because the water on the island is of high quality, the island can support an abundance of crops. It is also said that Jang Bo-go (787-846), who installed Cheonghaejin Garrison in the late Unified Silla period (668-935), solicited food from Cheongsan Island.

The fields on the island are mostly terraced because of the numerous mountains covering the terrain. Island residents invented gudeuljangnon, a method of placing flat stones underground to facilitate the water supply, and have continued using it for 300 years.

Kim Gwang-sin, the head of Yangjiri Village, said that he learned gudeuljangnon from his father when he was young.

Walking around the island, we saw an abundance of cabbages that grew in winter, including eolgali baechu and bomdong. These days, both cabbage varieties have peaked in terms of taste.

Meanwhile, Cheongsan Island is famous for the walking paths that achieved recognition from Cittaslow International, which represents the slow movement, as the first slow path in the world. The paths feature beautiful spring scenery with various crops and a view of the sparkling blue sea. The paths became famous after appearing in the hit film “Seopyonje.” In the film, the main character walks on a path singing “Jindo Arirang,” the Korean folk song that originated in Jindo, South Jeolla.

Geumdun Temple, located in Suncheon, South Jeolla, is ready to welcome the spring with its six red plum trees already boasting beautiful red flowers. Filled with these beautiful blossoms, the trees look like they are wearing a skirt of pink flowers.

“This is second time they’ll bloom this year. They already bloomed once in early January,” said Venerable Jiheo, who planted the trees from 1980 to 1983 and has cared for them ever since.

Red plum blossoms usually come out splendidly in January. As they bloom through the frigid winter weather, their fragrance is very sweet and they also have a long life.

Park Jong-gu’s house in Maegok County, South Jeolla, which is to the east of the temple, also has an abundance of red plum blossoms. The trees were planted about 18 years ago by Park’s father.

“The trees don’t look as good as usual because I usually watch the flowers without pruning the trees that much,” he said modestly.

According to Park, the flowers suddenly disappeared after blooming once last December. But they have been in full bloom since blooming around Lunar New Year’s Day.

It is always possible to observe the red plum blossoms at Geumdun Temple, but the temple asks that visitors be quiet. For details, visit www.geumdunsa.org or call (061) 755-3809. Also, visitors going to Maegok County to look at the flowers are asked not to disturb residents. For more information, visit maegok.suncheon.go.kr or call (061) 749-3615.