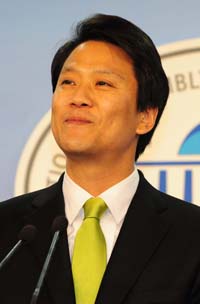 Submitting to growing pressure, the secretary general of the main opposition Democratic United Party yesterday stepped down from his post and surrendered his nomination for the April 11 legislative elections.

“I am now unloading the heavy burden as the party’s secretary general and candidate of Seongdong B District,” Im Jong-seok said yesterday in a press conference.

DUP Chairwoman Han Myeong-sook has been fiercely criticized after naming Im Jong-seok, a 45-year-old former student activist, to the party’s secretary general post in January despite his conviction last December for receiving bribes from Samhwa Mutual Savings Bank from 2005 to 2008. On Feb. 24, the party gave him the nomination for Seongdong B District of eastern Seoul.

Im appealed the case to a higher court, denying the bribery.

The party leadership had vowed not to give jobs and nominations to individuals convicted of corruption.

In 1990, Im was also sentenced to serve five years in prison for violating the National Security Law by masterminding an unauthorized trip to North Korea by Lim Soo-kyung, a female student activist, in 1989.

In the press conference yesterday, Im continued to argue his innocence on the political funding scandal. “I appreciate Han for trusting me until the end,” Im said. “I hope the people show support for the DUP, although it may have some shortcomings, so that history can go in the right direction.”

According to party spokesman Shin Kyoung-min, Han declined to accept Im’s resignation. “Because we are in a crucial period before the presidential election, we need Im to play the role of secretary general,” Han was quoted as saying.

It, however, remains to be seen if Im will stay on the job.

After the DUP decided to give nominations to Im and other politicians convicted on corruption charges, the party’s approval ratings quickly dropped. Senior members of the DUP have increasingly voiced concern about the situation and pressured Im to step down and give up his nomination.

Loyalists of former President Roh Moo-hyun were particularly critical of Han’s decision to give a nomination to Im. Members of Innovation and Integration, the organization established by Roh loyalists, held an urgent meeting Thursday to discuss the situation. Lee Hae-chan, former prime minister of the Roh administration, and Moon Jae-in, former chief of staff for Roh, were among the participants.

After the meeting, Moon met with Han Thursday night and delivered the concerns about nominating politicians convicted of corruption. An aide to Han said she accepted the Roh loyalists’ concerns.

Former lawmakers Shin Geh-ryoon and Lee Bu-young and Representative Lee Yoon-seok won nominations despite past convictions, and they said yesterday they have no intention of giving up their candidacies.

Former Representative Lee Hwa-young, the DUP candidate for Donghae and Samcheok in Gangwon, has been prosecuted on charges of receiving bribes from Jeil Savings Bank. He, however, claimed his innocence.