Court says no to arrest of diamond case envoy

Court says no to arrest of diamond case envoy 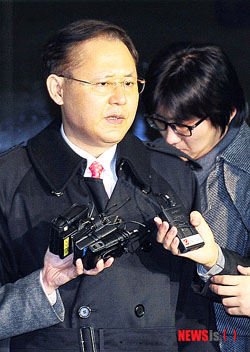 A court dismissed the prosecution’s request to arrest a high-profile diplomat at the center of a diamond mine and stock-rigging scandal, and the prosecution protested the decision, saying it will impede its investigation.

The Seoul Central District Court refused an arrest request for Energy and Resources Ambassador Kim Eun-seok, who had his duties suspended over the scandal.

“The suspicion that he colluded in the stock manipulation has not been properly laid out, and he is not likely to destroy evidence or flee,” said Judge Lee Chung-suk in a ruling late Thursday.

Kim, 55, is suspected of having used his influence as a senior official at the Ministry of Foreign Affairs and Trade to inflate the stock prices of CNK International by exaggerating the volume of diamond reserves in a Cameroon mine developed by the Kosdaq-listed company.

The scandal is centered on a fallacious Foreign Ministry press statement released in December 2010, which said the volume of diamonds in the mine near the southeastern town of Yokadouma in Cameroon was estimated at 420 million carats, 2.5 times the annual global diamond production at that time. The ministry made public a second release the following June.

The Board of Audit and Inspection has said Kim’s two younger brothers purchased stock in the company before the press release came out. Cho Jung-pyo, an executive of CNK who was Kim’s former boss at the Prime Minister’s Office known to have made some 1 billion won ($895,000) from trading the stocks of the company, was also referred to the prosecution by the financial authorities on Jan. 18.

The prosecution is investigating 59 bank accounts through which people made profits from CNK’s bonds.

Kim has denied any guilt, saying his actions were for the good of the country and part of its resource diplomacy.

The prosecution expressed dissatisfaction with the court’s decision. Earlier this week, the court also declined the prosecution’s request to issue an arrest warrant for an advisor to CNK International, saying that the charges were disputable and he should be given the right to defend himself.