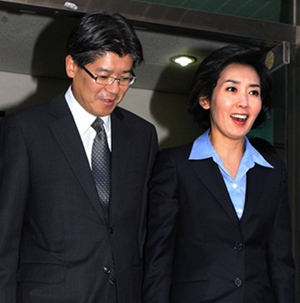 Police don’t often summon an incumbent judge for questioning, but that’s what they’ve done to Kim Jae-ho, husband of the politician Na Kyung-won, who has been accused of using his position to get a netizen prosecuted for criticizing his wife in 2005.

The Seoul Metropolitan Police Agency requested that Kim appear at the police agency next Thursday for questioning. Police said if Kim, currently a judge at the Seoul Eastern District Court, can’t show up then due to his trial schedule, he can make a new date.

On Monday, prosecutor Park Eun-jeong, 40, of the Bucheon branch of the Incheon District Prosecutors’ Office, admitted in a written statement to prosecutors to receiving a phone call in 2006 from Kim Jae-ho at the Seoul Eastern Court asking her to indict a 50-year-old netizen surnamed Kim on charges of slander.

Park told prosecutors that she forwarded the request to another prosecutor in Daegu with a Post-it note reading, “Case requested by Judge Kim Jae-ho.” Park couldn’t handle the case because she was going on maternity leave.

The netizen had written on a blog in August 2005 that Na Kyung-won, who was then a judge, had made a “pro-Japanese” ruling in a land restitution case filed by descendants of Lee Wan-yong, the late Joseon Dynasty minister who signed the annexation treaty with Japan.

Na went on to become a politician, a two-term lawmaker, and she ran unsuccessfully for the Seoul mayoral post last October. On Thursday, she forfeited her nomination in next month’s legislative elections over the abuse of power allegations involving her husband, saying her running would hurt the ruling Saenuri Party. Na publicly denied allegations about her husband last week.

“If testimony from Kim is different to Park, we are planning to summon prosecutor Park for a confrontational investigation,” said an official from the Seoul Metropolitan Police Agency. “And if necessary, we may summon the former lawmaker Na as well.”

Prosecutor Park Eun-jeong expressed her intention to resign to take responsibility for her role in the scandal last week, but it was not accepted by the Supreme Prosecutors’ Office.

Police also said they sent written questions to prosecutor Choi Young-woon in Daegu, who indicted the 50-year-old netizen after receiving the case from Park. Reporter Joo Jin-woo, who first broke the scandal on the popular liberal podcast “Naneun Ggomsuda,” (“I’m a Petty-Minded Creep”), was also notified by police to come in for questioning.