Navy livid over ‘pirate base’ insult

Navy livid over ‘pirate base’ insult 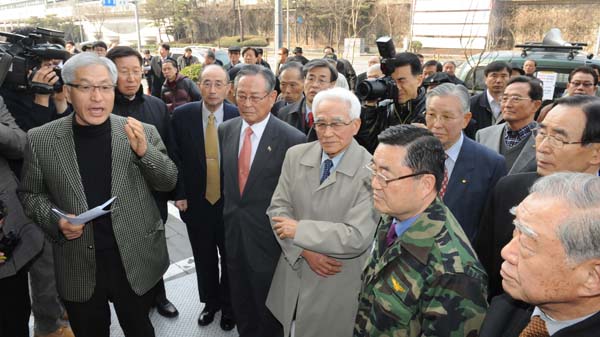 Kim Sung-chan, former chief of naval operations, and other Navy veterans lash out at the “pirate base” remark by a candidate for the Unified Progressive Party in front of the party’s headquarters in Daebang-dong, southern Seoul. [NEWSIS]

The Navy yesterday filed a defamation suit against a young female member of a minor progressive party for a posting on Twitter disparaging the naval base being built on Jeju Island, as the project continues to grow as an issue in upcoming elections.

Kim Ji-yoon, a proportionate representative candidate for the Unified Progressive Party in the April 11 general election, posted a tweet recently that described the 977.6 billion won ($874 million) project on Jeju as a “pirate base.” 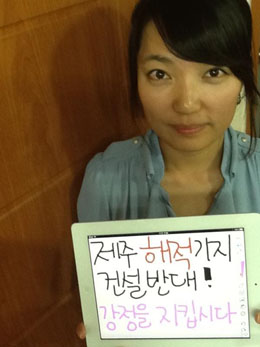 In a photo posted on Twitter, Kim Ji-yoon holds an iPad showing the message, “Opposing the construction of the Jeju pirate base. Let’s safeguard Gangjeong [Village].” [YONHAP]

“Since the Navy was founded in 1945, we have safeguarded our marine sovereignty with honor and pride as the descendants of the Chungmugong,” the Navy said in the letter, referring to the posthumous title of Yi Sun-sin, a Joseon Dynasty general who fended off Japan’s invasion of Korea in the late 16th century. “Kim immensely defamed and insulted the honor of all Navy officers.”

In a photo included on the tweet, Kim holds an iPad showing the message, “Opposing the construction of the Jeju pirate base. Let’s safeguard Gangjeong [Village].”

Ministry of National Defense spokesman Kim Min-seok expressed regret over her remark in a media briefing Thursday, saying it is the equivalent of calling all Navy personnel and their families pirates.

Kim Sung-chan, former chief of naval operations, and some other Navy veterans visited the headquarters of the Unified Progressive Party yesterday afternoon to protest.

Some family members of sailors killed in the sinking of the warship Cheonan followed suit. The March 2010 sinking, blamed on North Korea, killed 46 South Korean Navy officers aboard. The families are considering filing a suit against Kim.

Kim responded to the criticism through her blog late Thursday, saying she did not call rank-and-file Navy officers pirates. She said she was criticizing the Lee Myung-bak administration and the Navy for pressing ahead with a project that harms the residents of Gangjeong Village and destroys the natural heritage on Jeju.

The Unified Progressive Party issued a statement yesterday saying Kim’s remark did not reflect the party’s stance. The party has called for the suspension of construction of the base, and Lee Jung-hee, co-chair of the party, has attended a sit-in protest in Jeju since Wednesday.