Final round of Asian qualifier draw ‘not bad’

Final round of Asian qualifier draw ‘not bad’ 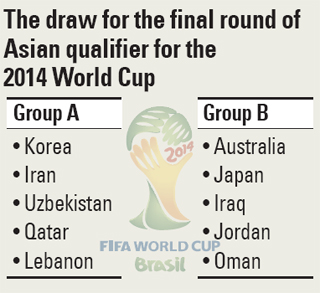 National football team coach Choi Kang-hee said the group drawing results for the final round of Asian qualifiers for the 2014 FIFA World Cup is “not bad,” as local pundits point out that Korea should collect points in the first half of the campaign.

In a drawing held at the Asian Football Confederation’s headquarters in Kuala Lumpur, Malaysia, on Friday, Korea, currently ranked 30th in the FIFA rankings, was paired with Iran, Uzbekistan, Qatar and Lebanon in Group A.

Before the group draw, the big issue was whether Korea, who was given the top seed along with Australia based on FIFA rankings, would be in the same group as archrival Japan and get revenge for its 3-0 defeat in a friendly match last August.

Choi, who took the helm last December from Cho Kwang-rae, previously expressed that he wanted to face Japan, saying he wanted to prove Korean football is not inferior to Japanese football. He also said it will be easier to face the Blue Samurais because playing against Middle Eastern teams requires greater traveling distances.

Although Friday’s group draw saw Choi’s wish dismissed as Japan drew into Group B along with Australia, Iraq, Jordan and Oman, the 53-year-old said the draw result is “not bad.”

“A road trip to Iran is difficult, but it’s the same with trips to other parts of the Middle East,” Choi said through the Korea Football Association body. “But what’s important is how we prepare [against these teams].”

The final round of Asian qualifiers starts in June as each team will play a total of eight matches in a home-and-away format.

For Korea, three of the first four matches are played on the road. The team will kick off its campaign away on June 8 against Qatar, and then will host Lebanon four days later. The Taeguk Warriors then meet Uzbekistan on Sept. 11 and Iran on Oct. 16, both on the road.

Local pundits claim that it is critical to collect as many points in the first four games in order for Korea to have a soft cushion throughout the campaign.

Choi also agreed the first half of the campaign is important and will not treat any opponent lightly. Choi said the matches in June will be critical.

“If we don’t prepare thoroughly, I think we will have a very difficult first home game,” Choi said. “I really have to consider our schedule and player selection.”

But according to experts, the overall schedule appears good enough for Korea to punch its ticket to the World Cup in Brazil. The away game against Iran, which is believed to be Korea’s toughest match, is not in a tight back-to-back schedule. Iran is ranked 51st in FIFA rankings and is a three-time World Cup participant. The Middle Eastern nation has scored 17 goals, more than any other country, in the previous round of Asian qualifiers.

The two nations have clashed multiple times. Both teams met in the quarterfinals of each of the last five Asian Cup tournaments and had hard-fought matches almost every time.

Their overall head-to-head record is even at nine wins, seven draws and nine losses, but Korea has never won on Iranian soil, with two losses and two draws.

KFA General Secretary Kim Joo-sung said. “The match against Iran is the only match in October, so I think the team can prepare well.”