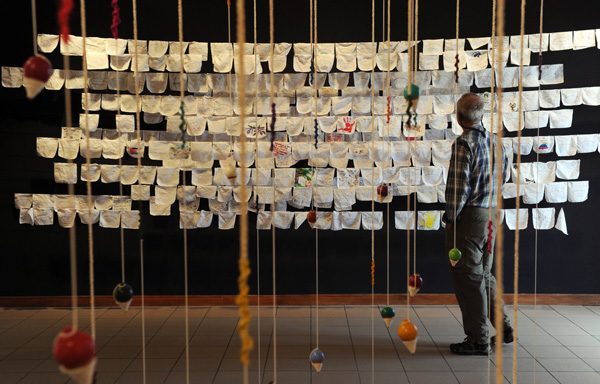 “Strokes of Korea,” an exhibition by Korean artists at the National Museum in San Jose, Costa Rica, on March 7. The exhibition is part of the “Museums and Galleries Route” during the International Festival of Arts being held in San Jose from March 1 to 25. [AFP/YONHAP]


Seven Korean performing teams ranging from a fusion gugak (Korean traditional music) band to a B-boy group will perform in Costa Rica’s capital city, San Jose, staring on Thursday. They are part of the International Festival of the Arts, known as FIA, which will continue through to March 25 in the Central American country. Korea is the guest of honor at the biannual festival this year.

Korea’s Ministry of Culture, Sports and Tourism said on Friday that the seven teams include the fusion gugak band Haegeum Plus led by Kang Eun-il and Namsadang+Ajak, a group studying and performing namsadang nori, or Korean traditional traveling troupes’ acrobatics and dance.

Among the teams are the B-boy group MB Crew and a Korean martial arts taekwondo performance team named the K-Tigers. Also included: an operatic pop trio Bridge of Soul, a contemporary dancing troupe called Han’s Dance and a group of selected artists from the Music for One Foundation, which provides free education and classical music concerts to underprivileged people. The groups will put on eight performances at the National Theater in San Jose.

FIA is the biggest cultural event in the Central American nation with 5,000 artists from 20 countries participating. More than 1 million people of Costa Rica’s population of 4.6 million are known to enjoy the festival’s various programs, according to Korea’s culture ministry. This year marks the 50th anniversary of diplomatic relations between Seoul and San Jose, as well as the 20th anniversary of the FIA.

A Korean pavilion will be built near the National Theater at La Sabana Metropolitan Park, the heart of the FIA, to introduce various aspects of Korean culture including hanji, or traditional paper, food, traditional costumes, handicrafts and hangul, the Korean alphabet.

Nine Korean movies, including “Hwangjini,” will be screened at the Cine Variedades in San Jose at a Korean Film Festival from March 17 to 25 every evening at 5 p.m.

As the FIA began as a theater festival, there is a strong focus on plays, dance and musical performances. It also has visual art programs. A number of museums and galleries around San Jose are showcasing special exhibitions until March 25. “Strokes of Korea,” an exhibition by Korean artists, is being held at the National Museum in San Jose.

Other highlights include: Artifacts and Instruments of the World at La Antigua Aduana, Andy Warhol and Huan Yang at Casa Amarilla, Picasso and Basquiat at the National Theater, Faces of Latin America at the National Gallery and political cartoons at the Juan Santamaria Museum in Alajuela.