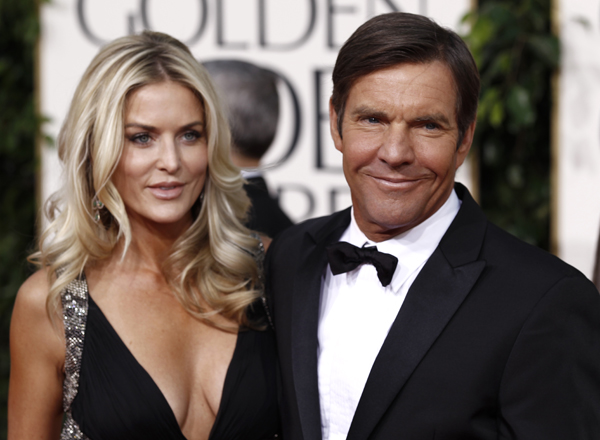 AUSTIN, Texas - Actor Dennis Quaid’s third wife has filed for divorce, saying the couple’s seven-year marriage has “become insupportable because of discord or conflict of personalities.’’

Kimberly Buffington-Quaid filed a petition in Travis County, Texas, using the initials “B.K.’’ and identifying Quaid as “W.D.’’ William is Quaid’s middle name, and two of the addresses in temporary orders issued as part of the case match up to those listed as among the Austin residences for Buffington-Quaid.

There are also references to two children born in 2007: the couple’s twins, Zoe and Thomas. The papers were filed on March 2. Word of them was first reported on Friday by TMZ.

Lisa Kasteler and Cara Tripicchio of WKT Public Relations issued a statement on behalf of Quaid saying, “We can confirm that Kimberley Quaid has filed for divorce.’’

“Contrary to what has been reported, a satisfactory settlement is being worked out for both parties,’’ the statement said, adding that no more information would be provided “on this private matter.’’

They say she believes the couple will enter into a written agreement providing for “possession of, access to and support of’’ the twins.

According to a temporary order regarding the twins agreed upon by both parties on March 2, Buffington-Quaid will be allowed to use a home in Austin and a Mercedes, while Quaid remains at another local residence with a Cadillac Escalade. The couple was to share a Range Rover already in Buffington-Quaid’s possession.

The twins were newborns when they nearly died in 2007. While at Cedars-Sinai Medical Center in Los Angeles, they were accidentally given an overdose of the blood thinner heparin. Quaid and his wife became the very public faces of the harrowing family ordeal.

“There were 41 hours where their lives were in the balance,’’ Quaid told The Associated Press in 2010. He added that it was the most frightening day of his life, and it left him and his wife in “shock, anger and confusion.’’ AP