Super stupa of the Goryeo Dynasty

Super stupa of the Goryeo Dynasty 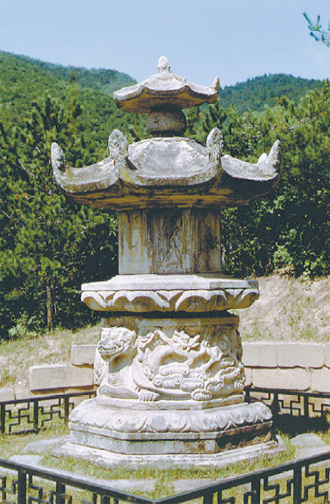 The photos and text for National Treasure are provided by the Cultural Heritage Administration. For more information, call (042) 481-4650, or visit www.cha.go.kr

Yeoju Godalsaji Seungtap, commonly known as Godalsajibudo, is considered one of the best examples of Goryeo Dynasty funerary stupa. It is also evaluated as the most beautiful stupa with refined carvings and well balanced figure.

The stupa is located on the site of Godal Temple, which was built in 764 in the 23rd year of King Gyeongdeok’s reign in Unified Silla Dynasty (668-935). The temple was remained as a grand temple during Goryeo Dynasty (918-1392) but now it is shut down with unknown reason shrouded in secrecy.

The stupa is estimated to be built in around 10th century of the Goryeo Dynasty. It follows the standard form of Silla on the whole and also shows the characteristic techniques of Goryeo in each carving at the same time.

When looking at the carvings on the middle stone, there are two elaborate tortoise-shaped figures feeling vibrant despite passing over a thousand year. The rest space is filled with four dynamic dragons and cloud figures.

Also, figures of heavenly maids flying gracefully with fluttering dress are carved on the eaves of its stone roof. These carvings mean that spirits who are kept in the stupa stay in heaven.

Following the legend, stone works in Godal Temple including Yeoju Godalsaji Seungtap were made by a stonemason named Godal. To complete the holy stone work, he spent whole three years with all his might to the work. But when he came back home, his family starved to death while he left. With deep sorrow and doubts about life, Godal became a Buddhist monk. It is said that the temple’s name, Godal, is also originated from this legend.