Skier killed in accident during ‘Nascar on skis’

Skier killed in accident during ‘Nascar on skis’ 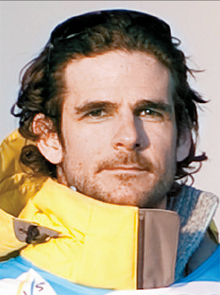 GENEVA - Nik Zoricic’s fatal crash in a skicross World Cup event in Switzerland appeared to be a freak accident, the Canadian ski team said Saturday as it mourned its second death this year.

The 29-year-old Zoricic died from head injuries sustained when he crashed into safety netting on landing wide right off a jump approaching the finish line at Grindelwald, a regular venue on the skicross international circuit.

“I would say it’s a freak accident, from here,’’ Alpine Canada President Max Gartner told reporters in a conference call from Toronto. “These accidents are extremely rare in sports.

“It doesn’t happen often but it’s devastating. We look at all our athletes as members of our family, so it’s hard.’’

Zoricic’s death will continue a debate on safety in skiing, particularly in the relatively new disciplines of freestyle skiing.

‘All the safety measures were in place,’’ Lewis told The Associated Press by telephone from Grindelwald, where she had attended the races.

Television pictures showed Zoricic tumbling through safety nets, and being pushed back toward the course. He was treated by doctors before being airlifted to a hospital at Interlaken.

Zoricic was pronounced dead at 12.35 p.m. Swiss time as a result of “severe neurotrauma,’’ FIS said in a statement.

“Nik Zoricic fell heavily just before the finish in the round of eight, crashing directly into the safety netting and thereafter lying motionless,’’ FIS said. “The organizing committee, FIS and Swiss Ski express their deepest condolences to the family and friends of Nik Zoricic and the Canadian Ski Team.’’

The governing body will work with Swiss ski officials to analyze the crash and course security, while a formal accident investigation will be conducted by legal officers from the canton (state) of Bern.

“There will be plenty of discussions from all the experts on the technical side and coaches, and any improvements people feel are right to make, will be made,’’ Lewis said.

Gartner said Alpine Canada was happy with the safety precautions in place for a sport it has described as “NASCAR on skis.’’

“We’re pretty confident that this was a World Cup race and there’s lots of rules and regulations, and inspectors on site,’’ he said.

“It’s not fair to make statements from afar,’’ he added, when asked about the Grindelwald course setting. He said “lots of races’’ place a jump close to the finish line.

Skicross - in which four racers jostle for an edge down a course of banks, rolls and ridges - debuted as an Olympic sport in 2010.