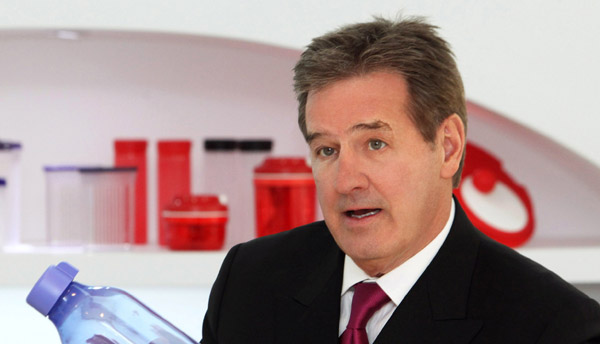 Rick Goings may not be mentioned in the same breath as Steve Jobs, but in the plastic kitchenware industry, he is known as a pioneer who has built his career on his belief in the power of innovation.

The CEO of Tupperware Brands, who has run the world’s No. 1 kitchenware manufacturer for 20 years, said that while his competitors were busy copying the food containers his company first made popular, his company was seeking new products and solutions to stay one step ahead of the game.

“We have a slogan: Every successful business model works until it doesn’t,” Goings said in an interview with the Korea JoongAng Daily on March 5. “We constantly must be renewing each of these [models] every year. Just like Apple has done with its products, it started out with the Mac, iPod, iPhone and iTunes. We started out as food storage, then we went on to kitchen preparation products. We keep saying to our research and development team, ‘Sure, we’re still in food storage, and Apple is still doing computers. Where can you go from there?’” 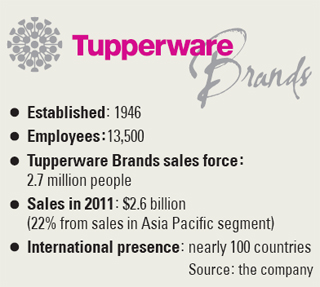 Although people are tending to cook less and order more goods online, Goings said he will stick to his unique sales strategy, which he calls “home party.” This sees the company’s salespeople visit a customer’s house to explain product features and share housekeeping know-how.

Goings said he has no plans to diversify his sales methods because “nothing beats face-to-face [meetings].”

Q. Tupperware has created localized products here, including containers to keep kimchi and rice fresh. Is this something you do in all countries?

A. In Mexico, we produce tortilla keepers. The French have particular need for cheese, because they see it as a product that continues to mature and season. When you put cheese into [our] Cheese Smart, the moisture is released so the cheese doesn’t get wet. It keeps the smell of pungent cheeses like gorgonzola in it. While 75 percent of our products are the same worldwide, 25 percent reflect our amazing customization, just like the kimchi keeper.

How fast is the Korean market growing and what’s the outlook?

In 1951, the Philippines and Korea were devastated by war - one by Japanese occupation, and the other the Korean War. Look at Korea today. It has 10 times the per capita income of the Philippines. When we had to build a factory here in Jincheon [North Chungcheong], the initial biggest cost was blasting rocks away, because this isn’t a place of full of natural resources other than its people. We had to learn that this was not a country where we would bring in cheap products. This is a country where we started with logical, purposeful kinds of products, including kimchi keepers.

I can’t think of another country where we have doubled in size in Asia Pacific in the last three years, other than Korea. We’ve invested millions of dollars here, because of the appreciation of the quality of products and the discipline of the Korean people. Our Tupperware formula, or how we do things, sits very well with how Koreans do things. This isn’t a formula where we’re going against the grain. The outlook is very rosy. We have more than 100 countries, and I rarely come to a country for five days [like I am now].

Do you have plans to build another factory in Korea?

Whereas Tupperware was the only option for homemakers decades ago, there are now many players on the market. How does Tupperware differentiate itself?

There was a great general, Von Clausewitz, in the Napoleonic era, who would still be seen as a great war strategist even today. One of the greatest things he taught was elevation. The theory here in marketing is ‘build brands.’ Build products that give you a high ground, because people will want those. For cheap, low-cost suppliers, [the low ground] is where all the fighting is. The smart way to do it is to build a brand. I have an iPhone and an iPad. The iPhone is more expensive than any other cell phone out there. But it does almost anything. First we use it, then we learn how to use the Apple Store, and I became an advocate for it. We demonstrate our products during our ‘home parties.’ Let Lock & Lock and all the others play. We keep introducing unique and revolutionary products, such as our Turbo Chopper, which replaces 100 knife cuts with a single pull of a string. Our whole goal is to make life easier for consumers.

Do you have any plans to diversify your sales channels?

No, because we own our space. Commodity plastic companies are all fighting each other for low-cost suppliers. When I joined the company, there was a Tupperware party starting every three and half seconds. Now it is every 1.5 seconds. This method is working, and it’s a very efficient way of doing things. We gave up low-ground commodity junk. We do unique things. Pick a great brand for Louis Vuitton, for example. You don’t see it everywhere. It’s the high ground. It’s the brand.

It is still going to be one-on-one sales. If you have been to one of our house parties, you become an advocate of this method. I don’t want to have every plastic bowl, but I want to have the best one. We don’t waste money on retail rents and retail advertising. I’d rather spend that on product quality. It’s a formula that works.

What challenges have you faced in running Tupperware?

A lack of innovation. The company became a product of its own success. For almost 40 years, they continued to do just what they had done in the past. The products that they sold were pretty close to the products they sold in the past. We had to change that.

The next thing was the selling method, the Tupperware party. It looked the same as the Tupperware parties of the post-war years. We have a slogan: Every successful business model works, until it doesn’t. We constantly must be renewing each of these, every year.