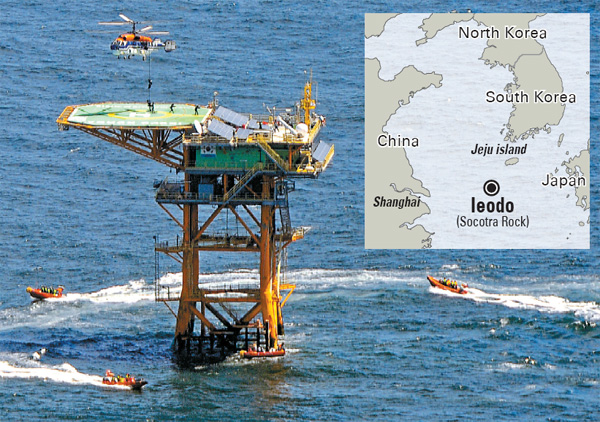 The marine science base built on the disputed Ieodo reef. [JoongAng Ilbo]


Korea’s territorial dispute with China over a submerged reef in the East China Sea has flared after an official in Beijing laid claim to it.

Liu Xigui, director of China’s State Oceanic Administration, claimed in an interview with Beijing’s Xinhua news agency on March 3 that the disputed Ieodo, known to China as Suyan Rock, is in waters that would be patrolled by the Chinese Navy and Air Force.

In response to media reports, South Korea’s Ministry of Foreign Affairs and Trade stated yesterday that it will seek for confirmation of the statement with China.

A spokesman of the foreign ministry said it will request the Chinese Embassy in Korea to “confirm if the reported statement is true and within what context it was brought up.”

China’s Ambassador to Seoul, Zhang Xinsen, was already scheduled to visit the foreign ministry to discuss the 20th anniversary of the two countries’ diplomatic relationship and Chinese President Hu Jintao’s upcoming visit to Seoul for the Nuclear Security Summit later this month.

The foreign ministry said it will raise the issue of Ieodo and North Korean defectors during the Chinese ambassador’s visit.

It is known internationally as Socotra Rock, after the British vessel that discovered it in 1900. Although located closer to Korea than China, it is still within the EEZs claimed by both countries. Despite protests by China, Korea built the Iedo Ocean Research Station on the reef, which was completed in 2003.

Under the United Nations Convention on the Law of the Sea, a submerged reef cannot be claimed as territory.

In 2007, China claimed on the Web site of China’s National Marine Data and Information Service that the reef was “Chinese territory.” In August 2008, after an outcry from Korea, it reworded the statement to say it was within China’s EEZ.

In December 2011, China deployed the Haijian 50, a 3,000-ton patrol ship, to the East China Sea to guard its country’s territorial rights. The vessel’s patrol extended to the waters around Ieodo.

The construction of the naval base on the island of Jeju Island, which began in earnest last week, may fuel territorial tensions with China. Should a conflict occur in the waters around Ieodo, naval aid from Busan would take at least 21 hours to arrive in the waters. That period would shrink to seven hours if there was a naval base on Jeju.