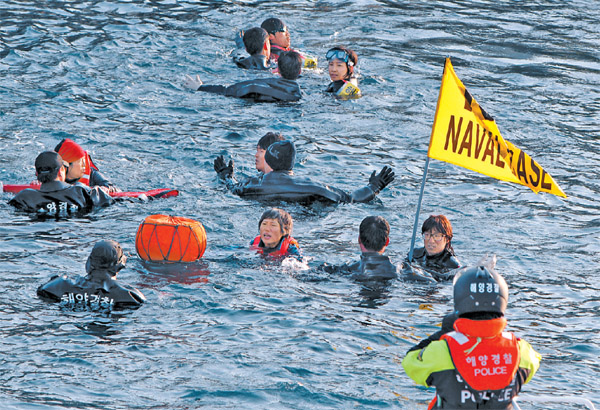 
JEJU - Residents of Gangjeong Village and those who oppose the Jeju naval base construction are aggressively and illegally obstructing construction work, causing delays to the completion of the base.

At 6:10 p.m. on Saturday, a group of progressive civic activists, including minister Song Gang-ho, jumped into the sea near the naval base construction site in Seogwipo and began swimming toward the base after they were stopped from entering the site on a pair of kayaks. “I decided to swim towards the construction site as a protest,” Song told the JoongAng Ilbo. 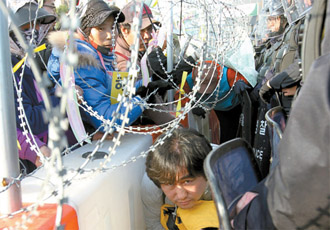 Anti-Jeju naval base activists on Saturday penetrate a barbed-wire fence designed by the police to block protesters from approaching the construction site of the base on Jeju. [YONHAP]

Following Song, several aggressive protesters including Kim Ji-yoon, a proportionate representative candidate for the Unified Progressive Party in the April 11 general election, dived into the sea, joining the minister’s protest. Kim recently posted on Twitter that the naval base was a “pirate base,” and joined the protest on Thursday. The Navy filed a defamation suit against Kim on Friday.

As the Navy pushed ahead with land-clearing work on the site, more and more protesters, including residents, religious leaders and civic group activists, have gathered near the site to protest, trying every possible method to stop the construction works.

On the other side of the Gangjeong port, a group of civic group members tried to climb over barbed-wire fences around the construction site but were caught by dispatched Jeju police. The police said that the protesters formed groups of two or three people that tried to gain access to the property by creating a one-meter (39.3-inch) diameter hole in the fence next to a lamp post.

As attempted break-ins continue, the police recently strengthened its security around the base, doubling patrol units around the fence and putting up more obstacles. Due to the added police, the protesters took another approach, deciding to gain access via the sea near the Gangjeong port.

As a countermeasure, the police have decided to put patrol ships on the coastline for 24 hours and have dispatched about 100 riot police to the main gate of the base. The police have arrested 29 other protesters, including minister Lee Jeong-hoon, who illegally tried to access the site on Saturday. Warrants to detain the minister and two other activists for illegally obstructing the construction and committing vandalism have been filed.

Under strong surveillance and protection by the police, the construction is speeding up. The police said that workers have begun flattening the land and conducting dredging operations after finishing their fourth round of blasting the rock bed along the coastline yesterday. While the process was going on, some protesters and local residents insisted that the water near the Gangjeong port was being polluted due to debris and sand generated from the blast spreading into the sea.

“It’s not true,” a spokesman for the Korean Navy told the JoongAng Ilbo. “While we were trying to drain off water that was generated by the concrete plant, some of the sand and debris was released into the sea by mistake, but everything is fixed and now under control again.”

Meanwhile, a series of accidents happened over the weekend. A floating dock, a ramp supported by pontoons, somehow collided with two fishing boats at Hwasun port in Seogwipo yesterday. The Jeju police presumed that the dock crashed into the boats while it was floating toward the concrete plant in the Gangjeong port, but they will investigate the accident in order to find the exact cause.