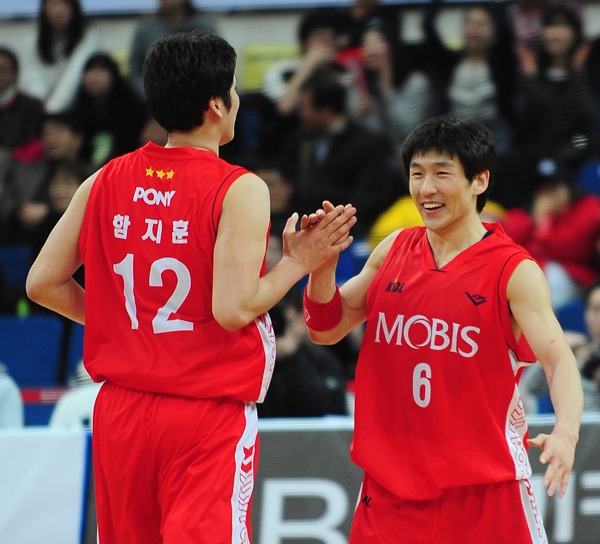 
After crushing the defending champion Jeonju KCC Egis by 26 points on the road, the Ulsan Mobis Phoebus went on to sweep the series and advance to the semifinals of the KBL playoffs.

But the No. 5 seed will now face its toughest test of the season: a best-of-five series against the Wonju Dongbu Promy, who earned a free pass to the final four after a historic regular season.

The Phoebus impressed against the Egis in two away games, opening the playoffs with a 91-65 victory and following up with a 76-68 effort. A 79-66 victory at home sealed the deal on Sunday.

Center Terrence Leather (6 foot, 9 inches) dominated in the paint throughout the series, posting two double-doubles and putting up 33 points and collecting 14 rebounds in the first bout.

But Leather and the Phoebus will face much tougher matchups against the Promy’s “triple tower,” comprised of Kim Joo-sung, Yoon Ho-young and Rod Benson.

Benson - averaging 19.6 points and 13 rebounds per game - and Kim will be a formidable challenge for Leather on the boards. The Phoebus also can’t expect to ride on its high shooting percentage against the Promy’s stifling defense.

“We know Dongbu is a better team than us, but no one knows what the result will be,” Phoebus point guard and team captain Yang said. “Of course, we sometimes feel pressure when we are on winning streaks, but in this kind of atmosphere, I don’t think we will lose to the Promy.”

The Wonju, Gangwon, club is considered to be one of the most dominant teams in KBL history after setting records for the longest winning streak (16), most wins in a single season (44) and highest winning percentage (0.815).

The Promy has also cemented its legacy as one of the strongest defensive teams in KBL history, allowing only 67.9 points per game.

With only one victory over the Promy in the last six regular season matchups, the Phoebus have a long road ahead of them with the best-of-five series kicking off on Saturday.

The Phoebus have surged since the return of forward Ham Ji-hoon, the 2009-10 season MVP, who rejoined the team after finishing his military service. Since his return on Feb. 24, the Phoebus have lost only once in 11 games.

The 198-centimeter forward improved his shot while playing with the military team, Sangmu.

“I need to beat the Promy,” Ham said. “I’m also confident in going against Joo-sung.”

Phoebus coach Yoo Jae-hak said it is true that the Promy are a tougher opponent than the Egis, but if his players can make jump shots like they did in the first round of the playoffs, the team still has chance to get through to the finals.

“Dongbu is bigger and quicker than KCC,” Yoo said. “Fortunately, we bought some time by sweeping in the first round, so we will prepare thoroughly for the upcoming match.”

On the other side of the bracket, No. 2 seed Anyang Korea Ginseng Corporation is waiting for their opponent as the Busan KT Sonicboom and Incheon ET Land Elephants are still competing in the first round.