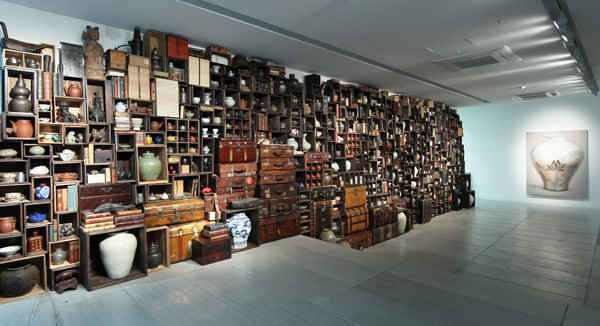 Lee Jin-yong’s collection of antiques made into a piece of installation art, juxtaposed with a painting of a ceramic jar. Provided by Arario Gallery

Lee Jin-yong, a Busan-based artist, has dealt with an obsession for the last several years: collecting pieces of ceramics. 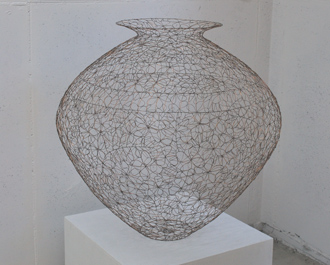 In fact, Lee is known to have been fascinated by anything antique, any piece that has captured a sense of the time in which it was crafted.

The 51-year-old has been collecting gramophones, cameras and suitcases since he was a teenager. So it’s no wonder that today his atelier somewhat resembles a museum.

This collection has inspired his latest solo exhibition at the Arario Gallery in Cheongdam-dong, southern Seoul, titled “Time Collected,” which runs until April 22. Some 50 paintings of pieces of ceramics Lee has collected are on display as well as artistic installations of the numerous antiques he has accumulated over the years. 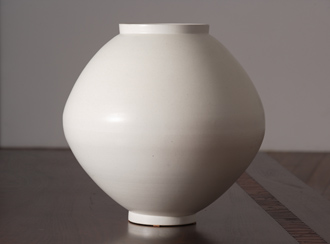 For the past four years, Lee’s love affair has been with ceramics. He drew some of the pieces on canvas. In an attempt preserve the art, he drew them using hyperrealistic techniques.

“When you look at the paintings, the clarity of these ceramics are depicted so well that it’s hard to believe that it’s an oil painting on canvas,” said Kim Yoon-kyung of the Arario Gallery. “It’s because Lee used soft oil paints and drew with thin brushes one layer after another.”

Some of the pieces are white porcelain, others celadon. Many were used by contemporaries, while others have been designated Korean cultural assets. Lee owns a portion of the pieces himself; others are on loan from acquaintances.

The Arario Gallery added that Lee not only captured the ceramics but also the space around it, describing it as “an attempt to seal the ceramics’ presence itself,” making it realistic yet abstract.

Perhaps the most interesting thing about Lee’s exhibition is how the ceramics - as well as other antiques Lee collected - will also be exhibited as a form of installation art.

Lee is hardly the only artist that’s inspired by ceramics. A special exhibition currently underway at the Ilwoo Space in central Seoul is dedicated to works by several artists with the “moon pot” or “moon jar” as their motif.

As its name indicates, a moon jar is shaped like a full moon. It is a type of traditional Korean white porcelain that emerged during the Joseon Dynasty (1392-1910). Yoo Hong-joon, the cultural heritage expert and the former head of the Cultural Heritage Administration, once described it as “something that best embodies the Korean sentiment.”

A total of nine artists with distinctly different artistic expressions are taking part in the exhibition - including Lee Lee-nam, whose works are gaining traction worldwide. As a result, the 51 works on display are in a diverse range of forms of art like drawings, sculptures, photography and crafts.

“Moon jars are not delicate, and oftentimes, the surfaces are rough - to the point where people can even feel the joints. But that is the beauty of moon jars - the aesthetics of being natural and plain,” said Yoon Moon-sun, the public relations officer at Ilwoo Space. The exhibition there runs until May 2.

To get to the Cheongdam branch of Arario Gallery, go to Cheongdam Station, line No. 7, exit 9, and walk for 10 minutes. For more information, visit www.arariogallery.com or call (02) 541-5701.

Ilwoo Space is located on the first floor of the Korean Air headquarters in Seosomun-dong, Jung District. You can get there from City Hall Station, line Nos. 1 or 2, exit 10. For more information, visit www.ilwoo.org or call (02) 753-6502.

The two galleries are closed on Mondays.