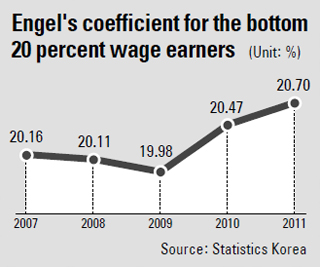 The ratio of spending on daily necessities such as food and nonalcoholic beverages to income among low-income households has hit its worst patch in six years as salaries have shrunk and consumer prices ballooned.

Last year, the lowest 20 percent of earners spent almost half their income on basic living expanses, according to a report by Statistics Korea.

The Engel’s coefficient for people in this wage bracket stood at 20.7 percent last year, as the government maintained its loose monetary policy.

The coefficient indicates people’s quality of life by assessing household spending on food and beverages as a proportion of overall income. A higher percentage shows that people are spending proportionally more. 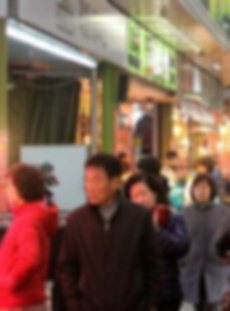 Last year’s rate for low-income earners was considerably worse than the average coefficient of14.18 percent, which is also the worst since 2005.

In contrast, the richest 20 percent of the nation had a rate of 11.83 in 2011, meaning they were twice as well off as poor households in purely proportional terms.

“As such, rising food and beverage prices had a much larger impact on lower-income families.”

Under the current administration, inflation has been moving in the range of 3 and 4 percent for at least the last year. In 2011, consumer prices grew by an average of 4 percent but they have cooled slightly to the upper 3 percent range in the last two months.

However, there have been exceptions, with the price of agricultural and marine products rising by an average 9.2 percent last year. The study also showed that poorer households’ spending on food, beverages, clothing and housing accounted for 45 percent of their total income, whereas the same proportion posted by the 20 percent of income earners was 31 percent.

Further adding to households’ woes, the average price of jeonse, or long-term housing rental deposits, rose 26.5 percent between January 2008 and the end of last year.

This compares poorly with its growth under the former administration, when the average jeonse price crept up only 2.9 percent between 2003 and 2006.