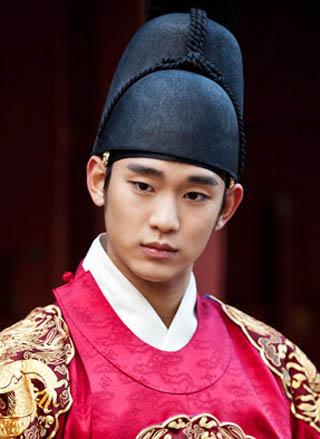 Actor Kim Soo-hyun is currently popular for playing a king in the period piece drama “The Moon Embracing the Sun.”

His popularity onscreen has translated offscreen, having landed him 15 product endorsement deals ranging from apparel to electronic devices. The culmination of the various contracts is thought to bring in some 5 billion won ($4.5 million) for the young star.

Keyeast Entertainment announced on March 10 that the 24-year-old has recently signed 10 new contracts. In addition, he has two pending deals and has had three previous endorsements. Kim’s agency said that its talent will film the commercials after “The Moon Embracing the Sun” comes to a close this week.

“Kim’s been flooded with offers for the next project. We are currently looking over every pitch and will decide whether to pursue films or drama,” said the actor’s representative.

Kim’s surging popularity and endorsement deals is reminiscent of the hype that surrounded actor Lee Min-ho after he starred in the hit drama “Boys over Flowers” in 2009. Lee appeared in multitudes of commercials after the success of the teen drama.