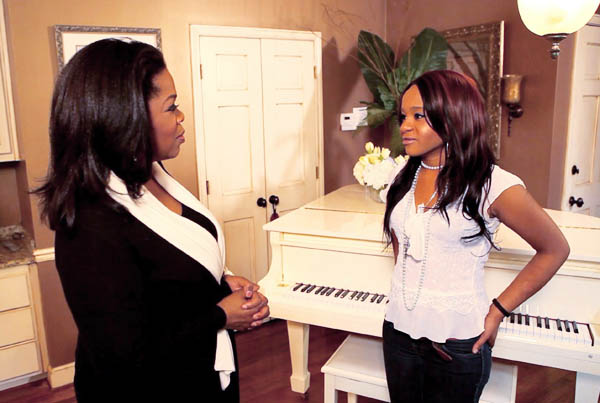 NEW YORK - In her first interview since Whitney Houston’s death, daughter Bobbi Kristina Brown said she’s “doing as good as I possibly can’’ and recalled the tender last moments she shared with her superstar mother before her sudden death last month.

“She’s always with me,’’ said the 19-year-old, Houston’s only child and sole heir. “Her spirit is strong, it’s a strong spirit. I feel her pass through me all the time.’’

Houston, who had struggled with drugs and alcohol in the past but according to family apparently had been clean, was found in a bathtub at the Beverly Hilton Hotel in California on the eve of the Grammys. She was to attend a pre-Grammy party the night she died.

Brown said the night before her mother’s death, she asked Houston to spend the night with her.

“I slept in her arms all day, all night long,’’ said Brown, whose father is singer Bobby Brown.

Pat Houston said in the days before Houston died, the singer had not been abusing drugs, despite reports that she had been acting erratically.

The 90-minute television special also touched on the singer’s ex-husband, Brown, who had a tumultuous marriage with Houston. While some have accused Brown of introducing Houston to drugs, leading to the once pristine singer’s downfall, Pat Houston said that was untrue, and both Pat and Gary Houston had warm words for Brown.

“I loved Bobby Brown. Bobby was a good guy,’’ said Gary Houston. “I don’t know how good they were for each other.’’

They also denied that the Houston family had asked Brown to leave her funeral service or didn’t want him to come. Brown showed up briefly but left after a dispute over seating.

“Bobby was supposed to be there,’’ said Gary Houston.

Bobbi Kristina Brown said she planned to carry on her mother’s legacy and become a singer, as well as act and dance. She expressed frustration over the “negativity’’ surrounding her mother’s image: “That’s not my mother.’’ Instead, she described her as her confidant, a sister, her best friend - “my everything.’’ AP