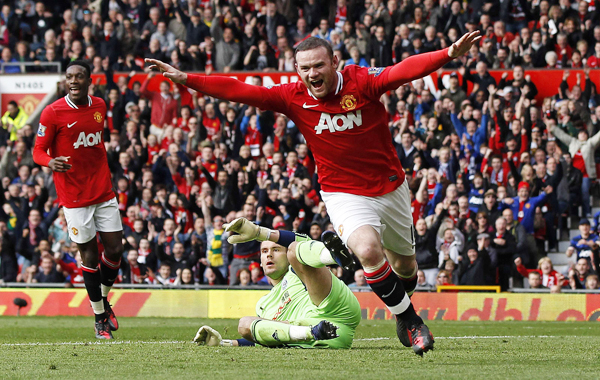 
LONDON - Manchester United seized the lead in the Premier League for the first time in five months on Sunday after beating West Bromwich Albion 2-0 on the same day that neighbor Manchester City slumped to a surprise 1-0 loss at Swansea.

In a significant day in this season’s title race, in-form England striker Wayne Rooney grabbed both goals for United at Old Trafford to take his tally to nine goals in six matches.

City was sunk by an 83rd-minute goal by Swansea striker Luke Moore, losing the lead to its fierce rival by the end of a round of fixtures for the first time since Oct. 15.

United has won seven of its past eight matches in a familiar late-season charge that left manager Alex Ferguson confident of the northwest giants extending their record haul of English titles to 20.

“We’ve turned it around and credit to the players for that. They have shown great resilience and determination,’’ Ferguson said. “We won’t get nervous, we have the experience, we will keep on playing and it is good to see that type of temperament.’’

City has failed in recent months to recapture the free-flowing style of football that allowed it to blitz all comers in the opening half of the season.

Although its home record remains perfect, City has lost four times away from Etihad Stadium, and it could have been worse had Swansea forward Scott Sinclair’s penalty not been saved by goalkeeper Joe Hart.

“The lead can change every game but it is important to start winning and scoring again,’’ City manager Roberto Mancini said. “All the players at this moment are tired, but we have a lot of energy to go top again and there are 10 games to play.’’

Both teams lost the first legs of their Europa League last-16 matches on Thursday, but it was United which reacted better despite West Brom coming into the game on the back of three wins in a row - the most recent being a 1-0 victory over Chelsea that ultimately cost Andre Villas-Boas his job.

Rooney moved to 20 league goals this season - and 26 in all competitions - after touching in a shot by Javier Hernandez in the 35th minute. He smashed home a 71st-minute penalty to seal the points after Ashley Young had been tugged back.

“We are plugging away,’’ Rooney said. “We have to keep going and keep picking up the points to get over the line. We know what we have to do and hopefully it will be enough.’’

Of all United’s strikers, Rooney looks most likely to fire the team to the title.

“If Wayne can get to 40 goals, I’ll be absolutely delighted because we will be in business then,’’ Ferguson said. AP